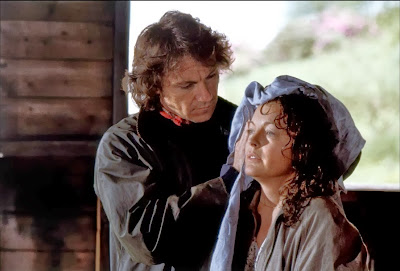 Here's some fascinating "deep cinema" news for y'all, with a bit of relevant Fawlty Towers trivia at the end. 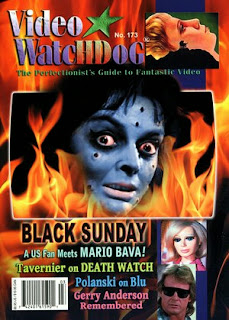 I interviewed Bertrand Tavernier last year, about the DVD/ Blu-Ray release of his 1980 film Death Watch (La Mort En Direct) - an old favourite of mine, starring Harvey Keitel, Romy Schneider, Harry Dean Stanton, and a just-terrific Max von Sydow, in a film that presciently targets video voyeurism and reality TV, in a dystopian world that looks all too like our present one, but was a work of considerable imagination at the time. That talk ended up seeing print in Video Watchdog - in issue 173, which you can buy here (it is a just-great journal of real film writing, in an attractive, DVD-sized, glossy colour format; plus their current issue has American Mary on the cover!). In the interview, Monsieur Tavernier and I talked about the changes between the European and American cuts of  the film, which are quite remarkable and affect the ending. During our talk, he never mentioned that he had any sort of dissatisfaction with the European version's twist, let alone any role in the changes made to the American cut, which omitted said twist when the film first was released here. The relevant excerpt is below; note that if you have not seen Death Watch, there are some major spoilers in these quotes, and that these spoilers still apply if you've only seen the old North American VHS (or a US film print), since the twist ending, present in all DVD versions, is omitted from those:

A: To your knowledge, why was Death Watch shortened in North America?
B: I don’t know, I don’t remember - I think they were afraid of the film! (Laughs). I think the film frightened a lot of people. I don’t even know if Harvey knew about the cuts. It was all the idea that the audience would not accept the film [without the cuts] - which is mad, because every time I showed the complete version, it was working.
A: I think the complete version is far more powerful. When you say “afraid,” you mean they were afraid of the political implications?
B: Politics - I don’t know. They are afraid the twist will not be accepted, that it will make the people of TV seem too nasty, because they were really killing somebody in order to film it. They were thinking they would save her, but - the plot [against Katherine] was extremely horrible to start with. But that was the idea! I wanted to say that there is a moment where you want so badly the ratings that you lose all moral values, ethical values in the storytelling. 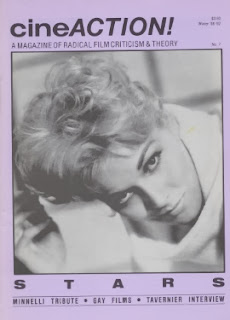 Fair enough, but here's the thing: UK film scholar Brad Stevens tracked down an interview between esteemed, departed film critic Robin Wood and Bertrand Tavernier in Cineaction #7, where Tavernier offers quite a different take on things. Cineaction #7 is apparently out of print, but editor Susan Morrison offered me the following as a helpful summation of the section in question:

Tavernier does say that he 'got a little lost', and that 'he should  have taken out some of the plot twists, which were too complicated and especially in the first third and at the end.. As for the twist at the end, I feel ashamed about it, that she was not dying. I could have done the film absolutely without that and it would have been better.'

Finally, Susan explains that Wood offers as a footnote that 'Tavernier was able to cut this 'plot twist' for the North American release.' This is fairly far out of step with the conversation I had with M. Tavernier - he said then, and has since repeated, that he had never seen the North American cut of the film, which implies (though not forcefully) that he had nothing to do with the changes made, even if they happen to conform to his wishes of the time (as they now appear to do). The explanation might be quite simple: it could easily be that Wood saw the North American cut, shortened by someone else - perhaps someone who knew of Tavernier's feelings, or perhaps not - and that he assumed Tavernier had a hand in it; it would be a reasonable surmise, based on his past conversation with Tavernier. I could have made the same mistake, if that, indeed, is what it was.
Monsieur Tavernier was kind enough to respond to an email inquiry on these matters, to say that "one changes his mind after some time. I am less adamantine against this twist, which is minor compared to what the film says." He also says that when the film was first prepared for DVD - presumably he means the French version - that he "shortened this last twist and made it less underlined."
The net result of that is that I'm really kicking myself for having sold my old Japanese VHS copy of the film, which contains the original twist ending; it was by stumbling across the film on VHS that I discovered the twist in the first place! At some point, foolish me, I sold it for pennies at the now-closed Vancouver location of Book Off, figuring it was redundant, since I had the French DVD. Now I learn that in fact it was likely a different cut of the film, even if only by seconds. D'oh! I confess when I finally saw the film on DVD I thought that the twist was less pronounced than I'd remembered it as being, but assumed that it was simply because the element of surprise wasn't there for me, discovering that a film I loved had a very different ending outside North America.
(Oh, and I probably wouldn't have gone on the rant in my introduction to the Video Watchdog piece about the cynicism and ignorance of movie distributors, meddling in the works of great directors, had I known that Tavernier himself had wanted the ending of the film changed... At least my rant still applies to the two versions of In The Electric Mist...).

As an amusing footnote, I had a much smaller Death Watch epiphany this week. It happens that I watched "The Kipper and The Corpse" episode of Fawlty Towers twice in short order; once with my girlfriend, and because we both enjoyed it so much, once again with my Mom. The first time through, I was struck by a feeling of recognition for the man who plays Mr. Leeman - the corpse, but couldn't pin him down. On second viewing, I realized - he's the author-turned-journalist who offers Katherine a counter-proposal to NTV's offer, near the beginning of Death Watch! His name is Derek Royle. 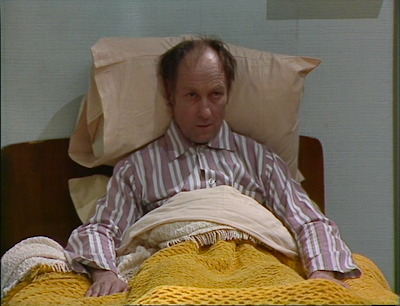 Finally, those seeking further news on Death Watch, should they make it here, can find another curious comparison of similarities between that film and the Sydney Pollack film The Electric Horseman, here.
I was supposed to be researching an entirely different film while writing this, but - ah well!
Posted by Allan MacInnis at 12:50 AM