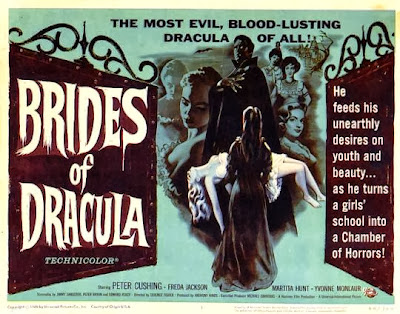 Managed to squeeze in a fun but flawed entry in the Hammer Dracula series this evening: Brides of Dracula, from 1960. It has many of the charms of classic Hammer: elaborate, detailed, and convincing Gothic sets and costumes, gorgeous Technicolour, and Terence Fisher's superb craftsmanship. Sadly, the film fails to live up to the promise of its first, terrific fifteen minutes, wherein an idealistic young French teacher with abundant red hair (Yvonne Monlaur) is waylaid en route to her new school by an aristocratic old woman (Martita Hunt). The woman's son, the Baron Meinster (David Peel), turns out to have a mysterious ailment that requires him to be chained up at all times... Little does our heroine suspect that she has been brought to the villa as a snack; in fact, she is so naive and trusting that when the handsome Baron attempts to seduce her into freeing him from his chains, she is all too willing to go along, without even considering the possibility that he is chained up for a very good reason... 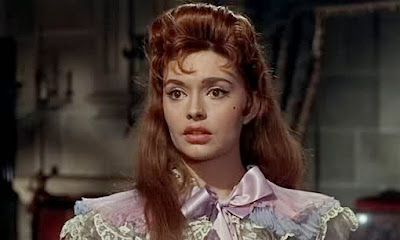 Her naivete aside, the film's many flaws really begin to make themselves manifest soon after the first bat appears. It is, in fact, such a bad, bad bat that it alone takes the film solidly out of the "classic" category and places it in the "camp" one. It is one of the stiffest, fakest bats ever to dangle from a stick, even if its wings do flap a bit (an effect I'm sure they were proud of at the time but which falls far short of realism). And once it shows up, somehow, the film's shortcomings start to accumulate exponentially. 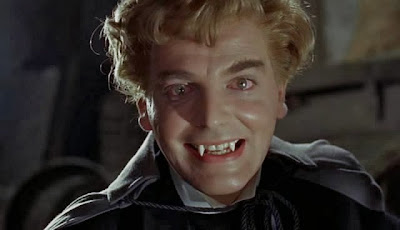 Sure, one can overlook the fact that Christopher Lee is absent from the film entirely, and that Brides of Dracula apparently was made before Hammer productions figured out the appeal of cleavage, since it is almost 100% boob-free; but there are also many things that seem like writerly failures. Surely after the young teacher releases the Baron from his bondage, and he promptly murders his mother, she would think twice about being further wooed by him, for instance? Sure, he's handsome, and she's naive, but he's not THAT handsome, and she gets to see the holes in Ma's neck close up. (It also remains unexplained why, given that bat ankles are somewhat thinner than human ankles, the manacle he wears kept him prisoner at all, when he could have presumably just transformed and flown away). Our heroine's stupidity really stretches credibility when her friend Greta (Andrée Melly), bitten by the Baron, rises from the grave right before her eyes, and makes to bite her. Somehow, after she is rescued, she manages to deny the evidence of her own eyes: surely it was simply someone who looked like Greta, and not really her? 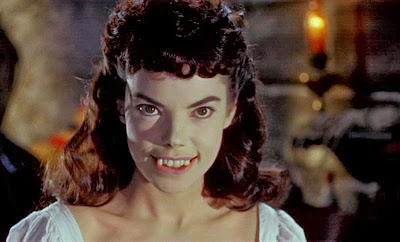 Peter Cushing, as van Helsing, has one great scene where he has to find a remedy for a vampire bite in his own neck - it involves holy water and a very hot piece of iron - and even seems to handle his own stunts, for instance in a scene where he leaps several feet from a balcony; but no amount of actorly zeal can make up for certain strange choices his character makes, again due to writerly failures. In two cases, for instance, village women are found dead, during the daylight, by vampire bite. He realizes what has happened, and knows how to deal with it, but in both cases, he elects to do nothing, and wait for nightfall, for said Brides to rise from the grave before he stakes them. Why does he hesitate at all? It could be explained - he doesn't want to alarm the villagers with his stakes and mallets and such - but it isn't, making him seem a most inefficient, strangely passive vampire hunter ("best wait til nightfall, when they attack me, or else people might get upset!"). This hardly describes his character in the other Hammer Dracula films. In lieu of action, he's given a lot of dialogue about the "cult of the undead," but the shoddy plotting shines through.... 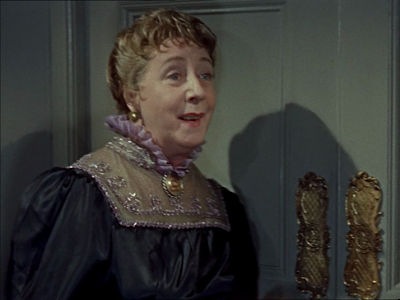 All the same, I enjoyed Brides of Dracula immensely. I was very pleased with myself to recognize Mona Washbourne, who later appeared in Lindsay Anderson's If... and O Lucky Man, in a small role (above), looking not much like she would in the Anderson films (it was her voice that was unmistakable). Yvonne Monlaur (still alive as of this writing, as is Ms. Melly) is pretty to look at, the film is tightly paced and  nicely shot, and the film has a fairly entertaining method of dispatching with the vampire at the end (spoiler alert!): the blades of a burning windmill are turned so their shadow becomes a gigantic cross, which falls upon the Baron as he flees. The film makes an interesting study of how flawed a movie can be and still work. In fact, I think I liked it better than Dracula Has Risen From the Grave, which is better written, but rather slow and predictable, and nowhere near as pretty to look at... 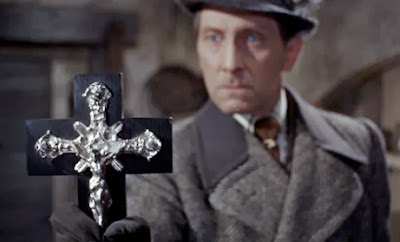 Perhaps it's childish of me, but I keep thinking of ironic variants on the Hammer Dracula titles: Dracula Has Driven From the Bank, Taste The Beef of Dracula, The Satanic Raps of Dracula... They're more fun to spoof than the Hammer Frankenstein titles, though I'm also fond of Frankenstein Must Be Subpoenaed...
Posted by Allan MacInnis at 2:16 AM