Orson Scott Card and the controversy over Ender's Game 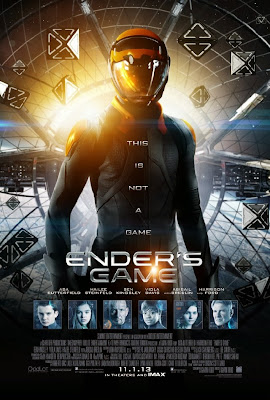 This is a fun little thing I did dealing with queer themes in Ender's Game, apropos of the current movie release. I had half-considered joining the boycott of the film; never did I expect that I would end up seeing it on assignment for Xtra!

Truth is, the controversy over the movie is much, much more interesting than the movie itself, which falls a bit flat. The special effects and battle-room scenes are great, but Harrison Ford gives one of the most wooden performances I've seen from him, and the narrative is so compressed that you don't really get into the minds of its characters, which is where most of the book takes place. The film even has to resort to a voiceover, at a couple of points, and various lines of dialogue - like repeated complaints from the film's recruits that they're tired - make less sense than they should, since the film omits scenes which explain them (like several of the "training battles" they go through in the book, which push the recruits much harder than we see them being pushed in the film). Pretty much the only real smile I got was seeing Ben Kingsley pull off a New Zealand accent (the Maori tattoos suit him, too).

Truth is, the book is a much better read than the film is a watch - and frankly, the weirdly queer subtext of the book makes it that much more entertaining; as I say in the Xtra piece, all that has been  thoroughly sucked out of the film, leaving it far less richer than it could have been (not that they'd have had an easy go of it if they called the aliens "buggers" throughout!).

Probably the queer community has done the film a favour with all the controversy; from what I could see, the film isn't going to be that much of a hit anyhow. I saw it last night at the Mission Silver City, and there were about five other people in the audience - not exactly packed (my buddy and I had arrived early in case there was a lineup but had lots of time for air hockey and some video gaming in the Silver City lobby before it was time to go in...).

EDITED TO ADD: this is worth a read, too, though it seems to be so busy right now that it's hard to get it to stay up. Apparently Orson Scott Card won't make a penny off the Ender's Game film - you can go see it without worrying that you're giving him money. Or so it is being said.
Posted by Allan MacInnis at 2:38 PM