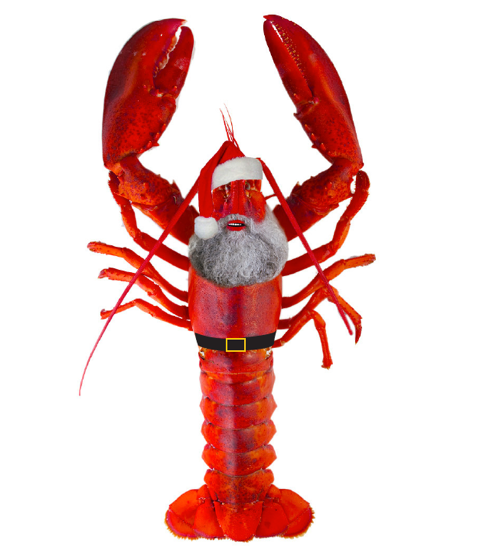 Erika helped me with the design of this! Friends wanting a free unique Christmas card are welcome to print it out - though, um, we retain copyright for any commercial uses: "not to be reused without permission," and so forth.

I kinda love it, tho'.  And by the by, this makes a fun card to go along with gift DVDs or Blu-Rays of The Lobster - easily my favourite film of 2016. That particular movie is 2/ $20 at HMV on DVD, though over twice that price on Blu Ray. Alas, supplies seem to be running out at some locations, especially with me buying multiples for people!

Merry Christmas from Lobster Claus! (And a big thanks to the great Pete Campbell for singing "Hockey Sucks" the other night. Lobster Claus will visit you soon, Pete...).
Posted by Allan MacInnis at 10:53 PM 1 comment:

All I Got For Now, plus gigs

Strange days... started a warehouse job, checking and packing parcels. Basically my girl got me it - it's at her workplace - which is kind of odd/ different for me, doing a job that my partner hooked me up with. It seems to speak a little to my lack of enthusiasm in looking for a new gig on my own steam, but there's no denying that's been a factor, lately, after disappointing experiences at pretty much every job I've worked recently. In particular, the stresses and frustrations of trying to scrape by as a writer have been mounting. I haven't felt a lot of passion for it, and I was singularly disappointed when the Westender, on changing editors, a) blew off a Pere Ubu article I had already begun working on and b) then asked me to do an article at less than 50% of what I was being paid previously, essentially adding insult to injury, without the new editor even seeming to notice what she was doing. The Straight has run a couple of things of mine in the last while - Anciients and In Flames - but are getting thinner and thinner and trying to rely on them for freelance work just makes no sense; I've donated the odd thing to them for online-only publication, but that also doesn't seem very wise (can't expect them to give me payin' work if I give them stuff for free, eh?). And then there's this weird phenomenon of people asking me for press, either personally or through a publicist, then not doing the article, either ignoring the questions I send them, which happened twice last year, one time from a guy who then continued to ask me to give him press (?!), or else not getting in contact with their publicists who have contacted me (happened two or three times last year, with La Femme, Arkona, and maybe LA Witch, though they at least tried to get in touch).

Plus - as some of you might have seen, since I briefly published a rant here - I felt on the end of some pretty disrespectful treatment at the Venue, after having been told I was guestlisted for a show, suffering an hour-long wait in the cold outside to get in, and then NOT being on the list, which led me to having to haggle with some rude and disrespectful people. Shit like that kind of forces you to take stock: after having done this for over ten years, I have neither a reliable income nor a lot of respect, so what the fuck have I been doing with my time?

The ESL school that I've been working at hasn't exactly worked out for me, either. I still like the place and like the people, and I suit the work well, but the short version of things is that we won a strike that meant everyone lower in seniority got laid off, as soon as the parent company started going through some (mostly unrelated) tribulations and student numbers plummeted. I've been at the school for something like fifteen years, but signed away my seniority when I took a "voluntary lay-off" the last time that the school went through trouble, circa 2011, so I could move back to Maple Ridge and be close to Ma in case she needed me. I had no intention of ever going back, at the time. If I hadn't signed on that particular line, I would have been working full-time through this period of drought, but as things are, I am now very near the bottom of the seniority list. It doesn't leave me a lot of enthusiasm for the union. I fought for it, supported them through the strike, but I wasn't thinking at the time that I was just working for the benefit of the senior teachers, which sort of seems to have been the case ("support the union so that when the freeze comes, WE can have jobs and you can go look for something else!"). I don't mean to bitch about it that much - there are also advantages to being in the union, I guess - but this is my second winter with basically no teaching work, or maybe just a few hours here and there, subbing or tutoring or "being a conversation partner." It doesn't really matter how I feel about it, it's not much like having a job, and it sure doesn't pay the bills. I had enjoyed being back there, got one good year of fulltime teaching in, but... who knows if it'll ever go back to how it was, or if I'll ever have a regular class again?

Starting near the bottom at some other ESL school isn't exactly inspiring, either...

So here we find me - a decent, interesting writer and a really good teacher - doing warehouse work. Grab a plastic bag with merch in it, check the merch against the paperwork, build a box the appropriate size, wrap item in newsprint, pack the box with extra newsprint, tape box shut, put appropriate stickers on it ("do not freeze" "fragile," a pictogram for "this end up," and a warning label instructing receivers to inspect the contents before signing for the parcel), and put it on the shipper's cart; pick up next bag. It's relatively simple work, though I still manage to stress out a bit internally ("did I overpack it? Did I forget a piece? How do I build a box for THIS?" - because occasionally there are some irregular shapes and sizes). Mostly it's hardest on the hands: the cardboard sucks all the oil out of my fingers, and moisturizing only puts so much back in: I end up with throbbing, pulsing pain in my fingertips for much of the time, and lots of little splits and cuts, which further lessens my excitement at writing when I'm not at the job.

But the company seems like an excellent one, which very smartly rewards BOTH long service and outstanding performance, where union shops seem to only recognize the former, producing mediocre lifers. Plus the people are really nice - lotta headbangers work warehouses, it seems! - and the radio is on while we work (classic rock - 101 FM - but I have stayed far enough away from that over the last years that I'm kind of enjoying it, and so far, two weeks in, I've only had to listen to "Hotel California" and "Comfortably Numb" - surely the two most overplayed songs in rock history - once each, which is kind of a pleasant surprise. And there are things I'm genuinely enjoying hearing again, like that cool little synth riff in Don Henley's "Dirty Laundry," say, or Heart, whose brilliance and stature as Pacific Northwest, female-fronted rock I can no longer deny or, indeed, avoid, since they get played a fair bit, somewhat to my surprise).

Given all the above, I haven't much to say. There are two, or maybe three, must-attend gigs coming up, in my book: David M's Christmas Alone in No Fun City is happening Monday at the Princeton. David has put together a Paul Leahy-centered NO FUN compilation to benefit his friend and collaborator, which you can get at CD Baby (or buy off him at the show). He and I have had a few bickering conversations about his not wanting to be involved in this Paul Leahy tribute show planned for January at the Rickshaw, I think with the Pointed Sticks and I, Braineater in attendance, but - save from noting the fact that NO FUN has been taking the piss out of tribute shows for their entire career, and aren't about to start taking them seriously now - I can't really begin to represent him on this count, especially not while my hands are hurting. Suffice it to say that it has nothing to do with David's feelings about Paul, whom he obviously counts as a great friend, and whose illness (from which, if you are unclear or in denial, Paul is not expected to recover) is devastating to him. He has said that if Paul asked him to be at the tribute show, he would be do it, but not otherwise. I will leave it at that - but I will still be at David's Xmas show on Monday (note that I have an interview with David M. and his passion for Christmas in the current issue of BC Musician magazine, which you can pick up at Zulu, Audiopile, Red Cat, Bone Rattle, Neptoon, or at Monday's show; I've brought it a few places besides but I've kind of lost track. That article does not appear to be online at their website as of this writing).

Finally, fans of Petunia and the Vipers, the Minimalist Jug Band, Rodney Decroo, Big Top, and Geoff Berner should note that all the above (and others!) are coming together in a fundraiser at the WISE this Thursday for Ms. Blanche Norton, AKA Karen Norton, written about in the CBC here (Al explains that Blanche is her assumed name and that the CBC went with her birth name. "Blanche" is definitely better than "Karen," as names go). That's a must-attend show, by me: even if you don't know Blanche, don't care about making a difference in her situation (which sounds grim and frustrating, but also SOLVABLE, so you should care, you should)... even if your heart is a lump of coal in your chest, on its way to being compressed into a diamond, that's a stellar cast of musicians they've got lined up. And I've never seen Geoff Berner before, despite having heard a ton about him, and have only occasionally seen Rodney Decroo, and then never for long... so... I gotta be there.

There is so much more I had thought I might like to write about - from my father's fondly-remembered trait of saying "excuse me" after he farted in his sleep to the weird tears I burst into reading Hubert Selby's "Song of the Silent Snow" to my girl in bed the other day to a dream involving Henry Rollins (I think reprising his role as a cannibal killer from He Never Died). But I have one last paid writing assignment to do, which is going to take up the last of the strength in my hands for the day, before I go back to building boxes tomorrow, and then it's Christmas and Boxing Day and New Years and stuff with my girl's family and....

I hope people are enjoying the holidays and get some good swag for Christmas. That's all I got for now. I don't even have a good title for this piece. You might not see a lot of me for awhile.
Posted by Allan MacInnis at 9:34 AM 1 comment: