I haven't anything serious to write about at the moment. I mean, not that I can do justice to. I'm beaten. My internet time has been spent going back and forth from videos by Dr. Robert Malone to stories about residential school graves to news of millions of sea creatures cooked alive in their shells during our heatwave to the constantly changing public messaging around the pandemic (NACI says that mix-and-matching is safe, and that's what I ended up doing, shortly before the WHO came out against it...). I'm full of low-key anxiety that our mass reopening might  be precipitous, expecting COVID numbers to open up, and then again wondering if people's fears aren't as overheated as those dead mussels on the beach. Add to that the uncertainties and vicissitudes of daily life and, well folks, I'm beat, and simply cannot muster the strength enough to write something serious at the moment.

So I'm going to just write about some movies I have enjoyed. Somewhat lowbrow ones. Entertainments, with aging white men as their chosen demographic. Sorry. I am, after all, an aging white man, what can I say?

Actually, it's funny how enduring movies are aimed at that demographic, even still - mostly movies about men who need to "remasculate" themselves (I am sure someone else has used that term before, but I was still impressed when Erika used it tonight, watching one such movie, as it was the first either of us had encountered it - so it had the effect of a clever coinage, regardless of whether it has been done before). You know the type - movies about (apparent) family men who suddenly must summon and re-master past violence to confront and set right a great evil (or better yet, protect an innocent from a threat). There's a long and deep trench of American popular cinema - from Unforgiven and A History of Violence to more trivial formula fare like John Wick - that has been dug by these films, which ultimately seem to reduce to being "male midlife crisis movies" - fantasies to assuage the bruised ego of men who have had to tone down their game to enter family life, who are aware of the vulnerabilities of getting old and need their egos and sense of themselves as "men of action" reassured. Bruce Willis is the poster-boy and patron saint of these films, and Die Hard is perhaps their pinnacle achievement - but has dropped weirdly below visibility lately, making films on a smaller and smaller budget that are about as alluring as the later career of Steven Seagal. He was even effectively replaced by Liam Neeson for awhile, but no matter: as long as your star is a white man aged 35-65, you can make one of these movies; the stars come and go, but the formula abides. They also invariably involve guns and bad guys and shootouts (oh my!). There is often a family that must be protected, that is ill-prepared to face the true nature of the main male character (the transformation of the milquetoast mathematician in Straw Dogs to efficient killer, for example, defending his home). The home is often destroyed along the way, or at least riddled with bullets, but the family is usually saved - essential to our continuing to identify with our hero as a hero... unless it turns out that the family is working with the bad guys to make sure the hero remains less than he can be (Total Recall springs to mind).

Given how obvious their appeals are to the psychology of male filmgoers - often family men, or at least married men, whose lives are no doubt also less wild than they were in their 20's - it's curious to me that so many women I have known enjoy these sorts of films, too. They seem to have an appeal across gender boundaries. Whatever Carol J. Clover might say about the feminist aspects of the "final girl" in slasher films - whom male audiences seem also to be able to identify with, also crossing the lines of gender - Erika will choose John McClane over even a great final-girl slasher film any day (I actually tried Texas Chainsaw Massacre 2 on her, Dr. Clover, I swear, but she's just not that type of girl; I still plan to attempt the Hooper Toolbox Murders with her someday, which is so self-aware it makes me sure Hooper read your book, but I don't have great faith she'll dig it). Maybe there's something about the midlife crisis that appeals to women, too, even if almost all of these films have, somewhere as their subtext, the validation of the law of the father and the principle that father knows best...? Do they enjoy seeing the male ego laid so bare, or do they just identify with the man and get into it?

Mom, come to think of it, would often be yelling "kill him" at the screen during the final showdown of such movies. I think her identification with the hero was pretty complete, at such times...

Anyhow, you wouldn't necessarily think that women could enjoy these sorta films, but Erika will sit down to such a film any day. They actually are kind of a middle ground we can both enjoy - and while it is sometimes odd to me the films I cannot share with her, the fact that I can lay the occasional Bronson on her is most appreciated. So we've been watching a bunch of these lately, Erika and I, and have caught some really good ones. Anyhow. that's what I sat down to write about... 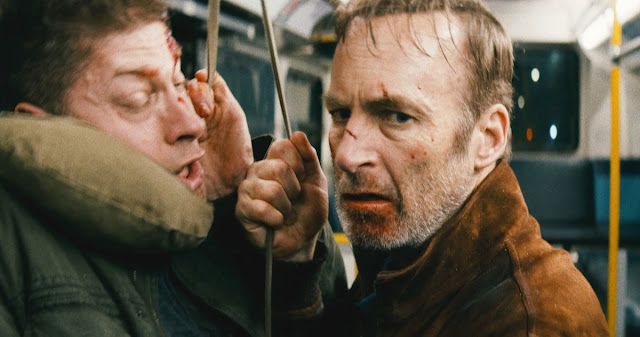 Nobody is pretty entertaining, in a silly, somewhat embarrassingly lowbrow, but still kind of witty, way: it knows what it is and approaches things with a smirk. It's great to see Bob Odenkirk as the star of the show, for a role that no doubt was written for him. It is on the more tongue-and-cheek end of the male-midlife-crisis thriller spectrum: A History of Violence by way of John Wick, with a few star turns from people who we might have expected to be retired by now (Michael Ironside, Christopher Lloyd). Erika and I also enjoyed Breaking Bad (another recent high point in the male-midlife-crisis-thriller genre), though we have yet to enter Better Call Saul. I hope the world doesn't end before we get the chance to. 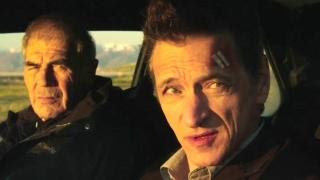 I also quite liked Small Town Crime, with John Hawkes, an actor I've enjoyed since the days of Benny's World of Blood, and with a small role for Robert Forster. It is also a bit on the lowbrow end of the spectrum - an escapist fantasy, ultimately - but more of a noir, with richer, more compromised, more "human" characters than the other films in this post, and quite a bit more grit (haven't quite figured out how its esthetic works with that of the director's next film, the "Mel Gibson as vengeful Santa thriller," Fatman, which probably also belongs in this genre - Mel's another poster-boy for it, really - but that one is quite a bit stranger than either this film or the average one; I mean, Santa?) Anyone who has missed Small Town Crime, incidentally, should go looking in the cheap bins at London Drugs; at least here in BC, Mongrel, or someone related, has dumped hundreds of underperforming movies to be sold at 3/$5, and Small Town Crime is by far the best of the half-dozen we've looked at so far. (Maudie, which is NOT a male midlife crisis movie, is also in these bins; The Trust and Galveston are also worth a watch, and A Vigilante, Marrowbone, and Revenge all look promising, though not relevant to this entry).

And speaking of Mel Gibson, he's also in the new Joe Carnahan, Boss Level, which is also very fun, taking in elements of time-loop thrillers like Source Code or Edge of Tomorrow - all of which of course owe something to Groundhog Day - and structuring them like an RPG. It's all quite clever, definitively solidifies the "time loop thriller" as a subgenre of SF, and has a nice lead role for Frank Grillo, though Carnahan-wise, I liked the Grillo film Wheelman far more, which is by far the best new car chase thriller I've seen in years (beats the shit out of Drive and Baby Driver, anyhow; I'm not going to compare it to Ford Vs. Ferrari, though, since that's a different animal). Gibson plays the heavy - a small role, really, which I don't think Mel is particularly suited for (he's a lead actor, and seems to handle anything less with the same sets of mannerisms). Again, it is smartassed and tongue-in-cheek about what it is doing; it's about as serious, ultimately, as Carnahan's A-Team movie (which Erika and I also enjoyed together), but both Boss Level and Wheelman are definitely also male-midlife-crisis movies. Neither of them are as good as The Grey, also by Carnahan, which explicitly amps up the "facing mortality" aspects of the midlife crisis movie - that ultimate emasculation that awaits us all - but... if what you need is a white man of a certain age in trouble, facing mediocrity or irrelevance, needing to prove himself with violence... well, any of these are pretty great, actually...
I am, understand, all for movies that are not about men needing to remasculate themselves, torn between their nostalgia for wild youth on the one hand and their loss of male potency, on the other... I am as puzzled that I myself can still enjoy a good Die Hard movie as that Erika can. Shouldn't cinema be more than this? Don't I miss my own youth, watching arthouse films and reading film criticism? Are these films really in some subtle way about re-asserting white male dominance that come to the fore when exactly that is being threatened?
Shit, I don't know, we just needed some light entertainment, and Boss Level, Small Town Crime, and Nobody all were a lot of fun. Don't judge us.
Posted by Allan MacInnis at 8:53 AM 1 comment: