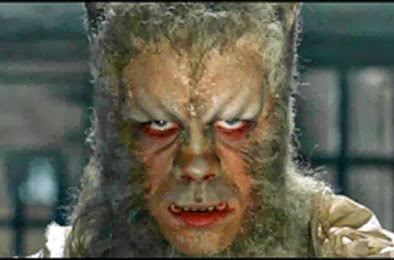 I have resolved to have a Hammer Halloween. That is to say that I'm going to try to consume a Hammer horror film every day - or at least every day I have the chance to watch a film - from now until October 31st. In the last week I've taken in The Mummy, The Curse of Frankenstein, The Revenge of Frankenstein, and Frankenstein Must Be Destroyed, and I'm presently halfway into Curse of the Werewolf, featuring Oliver Reed in his first credited acting role (above). Each of the above is absolutely terrific (perhaps because they were all directed by Terence Fisher?). I managed to miss all of these in my horror-watching childhood, am mostly familiar with them from photos in Famous Monsters of Filmland, since Hammer films seldom ran on TV and weren't widely available on VHS in Maple Ridge. That means I have a lot to catch up on - and I couldn't be happier at the prospect; I can't believe I waited so long to do this! 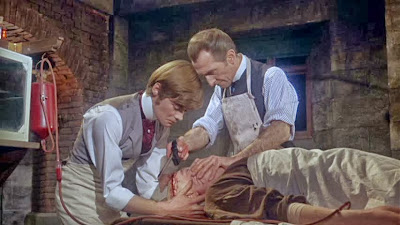 Granted, Hammer films are generally not astonishing, groundbreaking classics of cinema. They don't stand out like, say, Ken Russell's The Devils does (playing at the Vancity Theatre October 26th!). They are firmly planted in genre, often fairly conservatively filmed and structured, and - the odd hint of perversity or sadism aside - offer less in the way of surprises and more in the way of horror-loving comfort, as their stories play out true to form, delivering exactly what you'd expect. The thing is, they do this with craft and skill and great respect for all involved; they make a serious investment in offering detailed, well-told stories, often with imaginative sets and costumes, entertaining scores, lovely Technicolour colours, and some fun early gestures at gore (which is often imaginatively evoked, rather than shown: the most disturbing thing in Frankenstein Must Be Destroyed, for example, is the sound of Frankenstein's saw as he cuts through skulls, during his ill-advised, obsessive attempts at brain transplants. You don't actually see the skulls being sawn through - or at least you don't see much of it - but you hear them, and really, that makes it far worse). 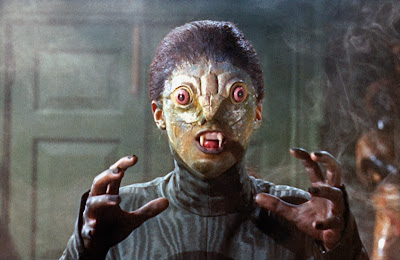 The whole period element is novel for me, too; I'm so used to modern horror films being set in the here-and-now that it's actually quite charming to take in what used to be the norm - horror set in the 19th century or earlier. I suppose at the time this was a comforting way of displacing the horrific elements in the films, adding a level of safety and lets-pretend to make the stories less traumatizing for their audiences, but from a contemporary point of view, it lends to a whole other level of craftsmanship to be appreciated. Much as I'm fond of a good slasher film, when did you ever catch yourself admiring the detail and imagination that went into constructing Camp (frigging) Crystal Lake? Compare it to a good Frankenstein's lab sometime! (It appears that the good doctor's lab is destroyed in the course of every single film, too, so it looks different each time...). 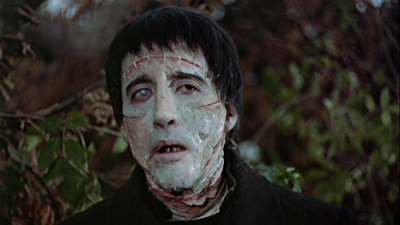 Add to which there is a very high quality of acting throughout. Peter Cushing is fantastic in each of the above films (Christopher Lee only appears in two of the ones I've caught thus far. He's somewhat underused in the first Frankenstein film - the only one he appears in, I believe - and is wrapped in bandages through most of The Mummy, so he's getting undersold at the moment, but I'm working my way up to The Horror of Dracula - which I have also never seen - and plan to do Mr. Lee full justice in time). Even supporting actors, like Richard Wordsworth - great-great-grandson to William, who appears in Revenge of Frankenstein and Curse of the Werewolf - make an impression. Plus Hammer had a way of choosing busty leading ladies (like Yvonne Romain, below) and packaging their cleavage like it was about to explode out at you like airbags deploying from a steering column; I can't say it's not a look that appeals to me. (I won't even mention The Vampire Lovers in this context). 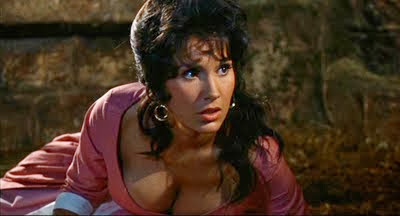 Yes, folks, I think I'm going to have a happy Hammer Halloween. Most of these films can be found on DVD (or elsewhere), should others care to join me. In addition to the various Frankenstein and Dracula films, I hope to catch The Devil Rides Out, Twins of Evil, Straight On Til Morning, The Hound of the Baskervilles, The Witches, The Plague of the Zombies, The Reptile, The Stranglers of Bombay, The Nanny, and Demons of the Mind (how can a film called Demons of the Mind possibly not be terrific?). 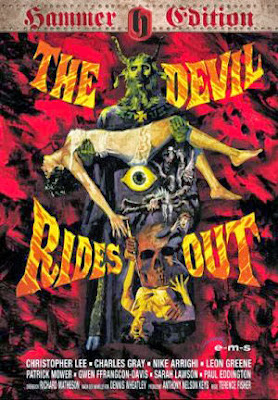 Posted by Allan MacInnis at 3:44 AM