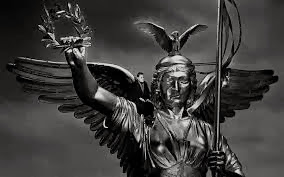 Wim Wenders' 1987 film Wings of Desire was a very significant film for me, a kind of gateway drug to the world of serious cinema. I had seen arthouse fare before on late night TV - stumbling across late-night screenings of Cassavetes, Antonioni, and Fellini, for instance - but, curious though I was, I didn't really understand what these strange films were, nor did I identify myself as a consumer of art films or foreign films up til that point; in particular, prior to age 19, pretty much all of my film consumption had been English-language only. I'm not sure what prompted me to check out Wings of Desire as a 19 year old, when it first screened at the Royal Centre cinemas (RIP), but it was an eye-opener. Though I wasn't (and still am not) that fond of the ending - a rather strained and talky "exchanging of vows" that I think indirectly suggests Wenders' own insecurity about committed relationships, often thematized in his earlier films - the first half hour, with the poetic density and beauty of its images and sounds, taught me how much richer cinema could be than the mainstream fare I had been consuming up to that point. When Michael Walsh, then-critic for The Province, described the film as being - I believe I quote exactly - "long and boring," it further helped me draw a line in the sand between the cinema and cinema criticism that I was interested in, and a certain stripe of populist journalism that I had nothing but contempt for - the "stupid and proud of it" crowd, which thankfully has grown less vocal in recent years (Walsh's favourite film from 1987 was the John Candy-Tom Hanks vehicle Volunteers, which, as I recall, made him the butt of a few jokes among cinephiles at the time). 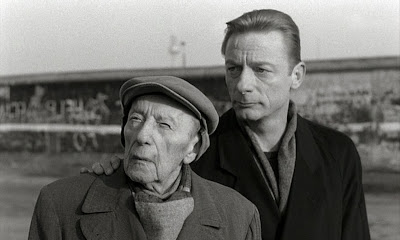 Anyhow, I strove to see every other Wim Wenders film I could  after that, including Kings of the Road, Alice in the Cities, The American Friend and The State of Things, all of which still have great resonance for me today. From Wenders, it was a short leap to Werner Herzog and Rainer Werner Fassbinder and the New German Cinema as a movement; then on to Bergman, Tarkovsky, Ozu and so forth. Wenders' writings also made a mark on me; I bought a pamphlet with a lengthy, influential interview with him and the first edition of Emotion Pictures, with his criticism provoking me to think about movies in a new way. He helped get me interested in westerns and noirs, in American independents like Nick Ray and Sam Fuller (both of whom I first knew as actors in The American Friend); he also got me thinking about the politics of film, in his descriptions of how the American occupation of Germany had resulted in a flood of gangster films and westerns, brought into the country to help re-educate the populus, and all but erasing local film culture (which was in a shambles, anyhow, thanks to Nazism). Not everything he said made sense: he described One Flew Over The Cuckoo's Nest, at one point, as a "fascist" film, and praised the fairly ideologically stifling Salt of the Earth, about striking Mexican miners, as a work of great film art - which it didn't seem to me, when last I checked it out, though I have not seen it in decades, so perhaps I would feel differently about it now... The fact that I more often than not had no idea what he was talking about made me eager to learn more about cinema, to come to a place where I *could* easily process his ideas; it was the start of a long and productive voyage, which I might not have embarked on - certainly not with the excitement and enthusiasm I did - had it not been for Wings of Desire... 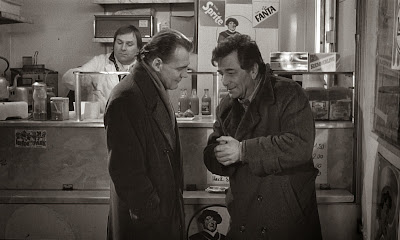 If, in 1987, I had no real precedent for Wings of Desire, I did recognize,a couple of the artists therein; I was, thanks to exposure to Cassavetes, a big fan of Peter Falk, for one (and yeah, sure, I liked Columbo, too!). Plus my musical tastes were a little more advanced than my knowledge of film at that point, so I immediately smiled in surprise when Nick Cave popped up to perform "From Her To Eternity" near the film's climax. Cave is why I'm writing this blog entry, in fact: to point out what is either an amusing coincidence or a tip to the hipness of programmer Jim Sinclair. Wings of Desire is paired this week with Jean Cocteau's Orpheus, and, of course, Nick Cave wrote a brilliant and darkly funny song based on the myth of Orpheus, "The Lyre of Orpheus," which everyone who cares about either of the films screening, or Nick Cave, or the story of Orpheus, should promptly listen to, if they don't already know it; it's one of my favourite late-period Cave compositions. Orpheus probably has all sorts of other resonances with Wings of Desire, and seems a perfect film to pair it with, but my mind immediately goes to Cave as the link between the films... damn does he look young in Wings of Desire... 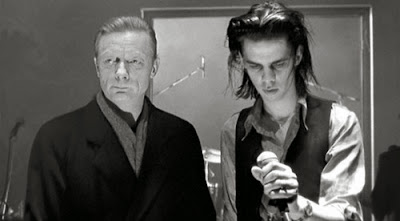 A final note: any appreciation of Wings of Desire seems incomplete without briefly mentioning with sadness the passing of three of the actors therein. Otto Sander, who played Cassiel, above, died recently (he also starred in the sequel to Wings of Desire, Faraway So Close, which briefly featured the recently departed Lou Reed). Dead, too, are Peter Falk and Solveig Dommartin, the circus performer with whom Bruno Ganz falls in love. Somehow that three of the key figures in the film are departed makes the film even more appropriate as a film to watch during the Halloween season, double billed with a movie that voyages quite literally into the underworld. Those who have not seen Wings of Desire should see it this week, on screen at the Cinematheque, and those who have seen it before might want to consider checking it out on the big screen - it's not a film that plays theatrically that often, these days, and it will be projected on 35mm - an increasingly rare format for viewing films in this digital age, which I discuss with Jim Sinclair here...
\
(Note: I wrote Jim yesterday to ask if there was any connection between Cave's song and the choice to double-bill these two films; his answer was, "nope!"). 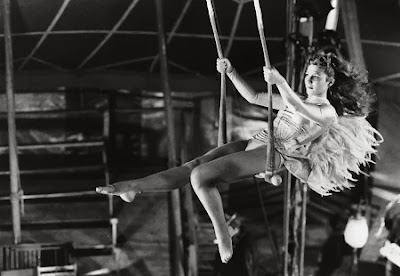 Posted by Allan MacInnis at 5:23 PM