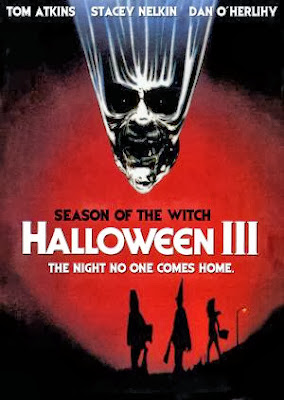 Wow. I just caught up with Halloween III: Season of the Witch, a film I ignored on its release in 1982 and am delighted to have finally gotten around to. It's one of those Debra Hill/ John Carpenter co-productions franchised out to another filmmaker - in this case, Tommy Lee Wallace. What it feels like, however, is the best damn John Carpenter film that John Carpenter never made. In fact, it feels more like a John Carpenter film than his recent The Ward - which is watchable, but not particularly inspired or original; and it positively beats the pumpkin seeds out of Halloween II. 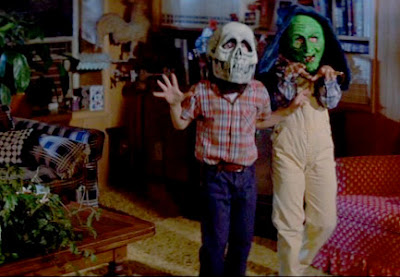 Nevermind the complete absence of Michael Myers (or Jamie Lee Curtis or Donald Pleasance) in Halloween III, or the absence of any slasher motifs whatsoever: the film has all the hallmarks of classic Carpenter - an excellent score by Carpenter and Alan Howarth; a solid lead performance by Tom Atkins, whom Carpenter fans will recognize from his roles in The Fog and Escape From New York; and a story involving a malign plot by an evil corporation, which involves a broadcast signal that must at all cost be stopped - which is at least somewhat reminiscent of They Live. 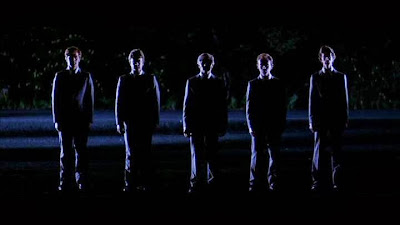 There's more that I won't go into - including a rather silly, strange but unquestionably inventive method of killing that seems to combine elements of technology and witchcraft (and fragments of a chunk of Stonehenge - not much of a spoiler there; any genre fans will know that when a TV broadcast mentions that part of Stonehenge has gone missing early on, said chunk will turn up again before movie's end). To think, had the film been appreciated at the time, we might have had a yearly franchise of inventive, Carpenter-produced, non-slasher Halloween movies, exploiting different facets of the season, instead of a bunch of unwatchable, forgotten retreads of ye olde slasher formula! Wish I'd given the film a chance back in 1982, but, um, better late than never....

I have not lived up to the Hammer Halloween proposal - I haven't been able to get one Hammer in a day - but I've seen The Devil Rides Out (which is just terrific) and Dracula Has Risen From the Grave (which is pretty damn dull; so far I'm not convinced if it's Hammer I like, or Terence Fisher). I may try another Hammer tonight, however. Hands of the Ripper, anyone? How about Rasputin, The Mad Monk?

Meantime, watch my Huffington Post page for more writing from me. (My interview with Jim Sinclair of the Cinematheque about their programming and the merits of 35 mm vs. digital should be of interest to a few people, but there's more to come, I promise...
Posted by Allan MacInnis at 9:49 PM