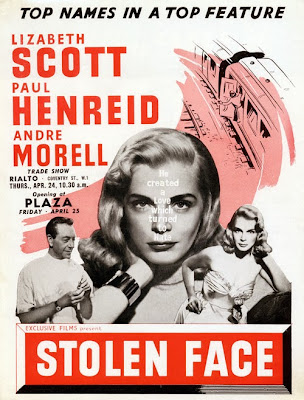 Enjoyed The Horror of Dracula with my Ma tonight, but also caught an early Hammer studios Terence Fisher film noir, Stolen Face, starring the sultry Lizabeth Scott, to whom I recently mailed chocolate (more on that below). Any reservations about her acting ability - the whole "Budget Bacall" thing, which saw her typecast as femmes fatale in increasingly minor films - should have been put firmly to rest by this great little 1951 flick, since she plays two characters with the same face, one of whom is an American, while the other has a pronounced Cockney accent... This in service of a variant on the Pygmalion theme, with a hint of Eyes Without A Face and (the later) Vertigo: a plastic surgeon (Paul Henreid) at work in Britain romances an American pianist (Scott), but gets dumped by her. It happens that he is involved in charitable work, helping incarcerated criminals reform by giving them plastic surgery to conceal any deformities and give them a fresh start in life. He takes on badly scarred female convict - and surgically replicates the face of his loved one on her! (It doesn't get gory but with hindsight it's hard not to see hints of Frankenstein and his many laboratories in the obsessed doctor's milieu and actions). That's only the start of it, too: the doctor, lost in fantasies of having a perfect wife who is forever in his debt, who just happens to have the face of the woman he loves, romances and then marries his patient. Of course, it turns out a lifetime of criminal habits isn't so easy to overcome... Then the plot thickens further when the original Lizabeth, on tour playing piano, has second thoughts and decides to go back to Henreid - arriving to find him married to a woman who looks exactly like her!

This was my first venture into Hammer noir but it was most encouraging - this is a great little film, highly recommended... 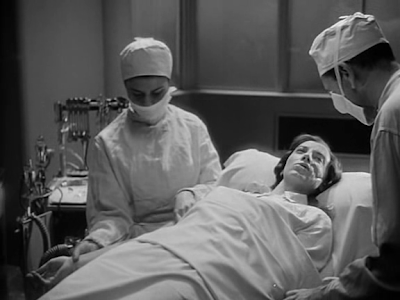