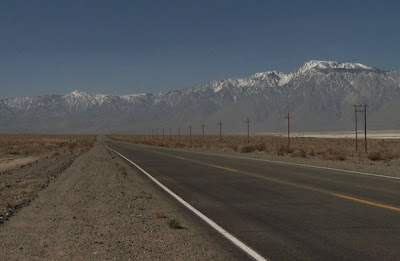 Sometimes it can be very hard to pin down what makes one film work and another not. James Benning's 13 Lakes, for instance - consisting of thirteen reel-long static shots of American lakes - was one of the most compelling and rewarding theatrical experiences I've had, when I caught it at a past VIFF, as was his railroad film, RR; his more recent Ruhr, however - also consisting of static shots, this time of a variety of subjects, from Muslims at prayer to a tunnel with traffic to a tower periodically blowing steam that was no doubt designed to evoke 9/11  - was nowhere near as gripping for me. I really can't say why; is it that I simply like lakes and trains? Is there something in their rhythms that is essentially hypnotic, that was not captured by the more idea-based, didactic rhythms of Ruhr? Was I less in the mood for Ruhr, more prone to distraction, on the night I sat down to it? Since I previewed it on video, I had the option of pausing it, or skipping ahead, all of which seems singularly inappropriate with a James Benning film. That might be the problem right there - that I was insufficiently humble/ submissive before the images to get their full effect; but it 20 minutes of intermittent steam doesn't grip me, why would an hour of it? Other than the very long takes, maybe some other feature of the medium (Ruhr was shot on digital video, the others on film) seemed less pleasing to my eye, I really don't know; I don't think I could begin to make an objective argument as to why 13 Lakes (or RR) are must-sees for any lover of cinema, but Ruhr not so essential, despite my very different subjective experiences. In most cases, with films, I can give some arguments as to why I am or am not enthusiastic about them, but with films as experimental as Benning's, it's far less easy to do.

That said, Benning's new film, small roads - all in lower case - sounds like a very promising subject, and I'm looking very much forward to seeing it (I won't preview it; even if a screener is available, I'd rather watch this in the church of cinema). The VIFF guide likens it to RR; I found RR a surprisingly playful film, even recall laughing at certain moments (visual "gags" onscreen that I can't really recall to describe - Benning does have a sense of humour, which is made all the funnier in that you don't necessarily expect it). The sounds were astonishing, too - occasionally I was moved to close my eyes, so I could just hear the trains going by, which may seem like a strange way to "watch" a film, but which proved amply-rewarding: the film left behind being merely meditative and approached the levels of the trance-inducing, which I hope will also be the net effect of small roads... I'm all about the subjective effect, watch films like this because I (usually) like what they do to my mind and my senses, rather than because of anything I hope they will "show" me... 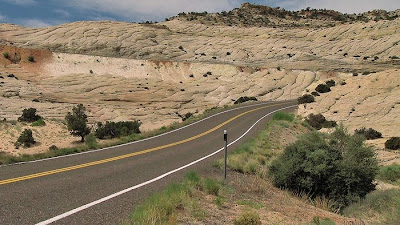 Another film in the VIFF this year seems to bear the marks of Benning's aesthetic, Denis Cote's Bestiare; as with Benning's films, the camera does not move, certain images extend beyond the expected, and there is no narration or dialogue (though as with Leviathan, written about below, people do occasionally talk to each other; I presume the French will not be subtitled when it screens). All the same, the film - like Ruhr - clearly has ideas up its sleeve that extend far beyond total sensory engagement; it offers a critical/ poetic filmed essay about the relationship humans have with animals, shot in the context of a Quebec zoo. Images are framed less to hypnotize than to provoke a sense of estrangement, to make the practices depicted as unfamiliar and as baffling as possible. The upset the animals feel at being caged is captured very poignantly at times; there is a powerful shot of a padlock rattling against a metal door as a lion pounds against it on the other side. The animals, as the very apt VIFF guide description says, also look back at us, the viewer, staring into the camera as if both to challenge our own complacent mode of spectatorship and to emphasize their own restless subjectivity, as constrained by their environment. Some moments in the film are positively surreal in their impact; a visit to what appears to be an in-house taxidermy shop, where we observe a worker preparing a duck for display, raises baffling questions about our relationship to animals - like, why the hell do we stuff dead ones, anyhow? What a strange thing for one species on this planet to do to the others...! More on the film here and here. It's a highly interesting experience, but I confess that, referring to whatever subjective scale I evaluate such matters on, it was not as compelling to watch as, say, the cows going out to pasture at the beginning of Bela Tarr's Satantango (perhaps my favourite image involving animals in recent cinema). Perhaps I'm just a beauty addict? Maybe it's as simple as that? ...Still, Bestiare is well worth a look. 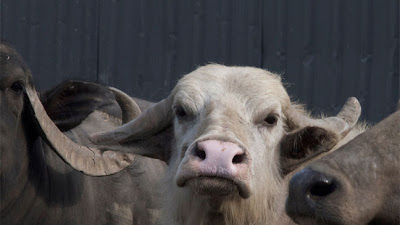