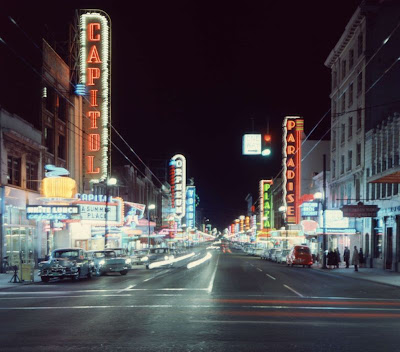 Graham Peat is the co-founder/co-owner of Videomatica - the former video rental institution, surviving now as a sale store attached to Zulu Records; I interviewed him about Videomatica's history here. He also regularly curates and hosts film events, many dealing with the history of Vancouver on film. His newest project, City Lens: 60's Vancouver by Night & Day - plays October 9th and 12th at the festival. Since the information is essential to this post, I'm cut-and-pasting the description of the film from the VIFF catalogue below, below which is an email interview with Graham Peat...


Vancouver in the early 60s was emerging as a city and CBC Vancouver’s film unit, influenced by Italian neorealism and film noir, uniquely captured intimate stories of that period. The talented team produced docu-dramas, portraits, and dramas—all presented as city stories. Each mirrored the grit and glory of our city and some imaginative visions when darkness fell, fuelled by jazz and neon.

The Seeds (1959) VIFF premiere! Jukeboxes, hot rods and whiskey drive this drama about a gang of misfits who hang out at a Hastings Street juke joint. A booze-up at the waterfront rail yards results in them terrorizing a young mother and her child for kicks. The Seeds was refused broadcast by the CBC and never aired due to its disturbing content.

The Outcast (1963) A young man with a past leaves his Downtown Eastside rooming house to look for work. He shares his thoughts as he visits the docks and rail yards, shores of English Bay, the industrial Granville Island and neon-clad downtown by night.

City Patterns (1962) Inspired by the "City Symphony" films, this tribute to Vancouver’s architectural expressions is a parade of interlocking images set to a rousing classical score.
PNE Midway (1960) Shot when the fair turned 50, this visual diary follows carnies as they ready for the crowds; the frenzy of rides, games and concessions, until the midway calms after closing—all rendered in glistening black and white.

AM: How are you sourcing these films? How many did you look at before selecting these? How much more material is there to be considered?

GP: The research for these history programs is ongoing. It's just something I love to do. I usually approach festivals with suggested programs. Sometimes they approach me with a theme. It has worked out well so far with programs presented at Cinematheque, DOXA Festival and of course VIFF for the third time now. City Lens is just one of several potential programs of unseen films I'd like to bring to the big screen. For this show, the films were all made by the CBC-TV Film Unit between 1959 and 1963. The drama "The Seeds" is a premiere. It was rejected by the CBC head as too controversial and was never broadcast. Too realistic a portrayal of displaced youth? I can't wait to see the audience reaction we will get now.

AM: Any particular local highlights that caught your eye in selecting these particular films? Are there any locations depicted in the films that have a personal resonance for you - places that were still around during your childhood, say?

GP: Every one of these films reveals images the city half a century ago. From the docks and railyards, Granville and Hastings streets, English Bay, Granville Island (when it was industrial) to the brand new Oakridge Centre, we see our raw but compelling past, whether we personally experienced it or not. That's the trip. The one film I think many of us will relate to is "PNE Midway". The magic of Playland is still there after 100 years and this fine portrait was shot 50 years ago.


AM: I think you mentioned films relating to the early Vancouver music scene when we spoke - not sure if that was in regard these films or others, yet to be brought into the public eye...

GP: I mentioned that I was interested in a doing a series on Vancouver music/bands. It's going to take more time to develop and the right contacts but I want to do it with a lot of guests.

AM: Are the filmmakers and/or actors - in the case, say, of The Seeds, which sounds fictional - themselves local? Have you tracked any down?

GP: Two films are documentary portraits but two others have characters. "The Outcast" is a doc narrated by and featuring its subject - a young man recently released from prison who spends his day looking for work and trying to fit into society again. "The Seeds" is a drama starring three very solid Vancouver actors - Merv Campone, who later went on to write for The Beachcombers, Lillian Carlson, who made many TV movies, a few features and appeared regularly in CBC series [her credits include Caribou Country, The Beachcombers, Danger Bay, and DaVinci's Inquest]. Otto Lowy was later famous for his long-running CBC Radio series Transcontinental Express. More notes below.

Although much of the talent has passed on, we will have several guests at the first screening. These may include John Fuller Dir/Ed ("The Outcast", "City Patterns"), Doug MacKay, DOP ("City Patterns", "The Outcast"), Kelly Duncan DOP ("The Seeds"), and Stan Fox (producer).

Re: "PNE Midway", Paul Leach (dir/cam) worked for the NFB here in the 60s, freelanced for CBC Vancouver, then moved to New Zealand and became the most-respected cameraman there on many features I remember from the 70s and 80s: Sleeping Dogs, Smash Palace, Utu and The Quiet Earth. He passed away two years ago (2010).

AM: Any other surprises in store? (Videomatica news is also welcomed - how's the sale store working out? Any chance that you'll ever be putting together a compilation DVD of archival material you've dug up?).

GP: Re the archival programs - We only get festival rights with the from each archive so would have to negotiate rights for a release. I have been asked for DVDs of the shows since "City Beats" in 2008 but have not pursued this. I don't know how much demand there really is. Folks sure do like the live shows though!
Posted by Allan MacInnis at 8:49 AM