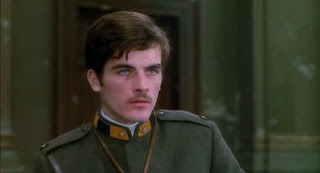 Mark Frechette fascinates me. His bio includes involvement in the Mel Lyman "cult" - read the essay on Lyman from Mindfuckers: The Rise of Acid Fascism here - and ends with him dying in prison at age 27, where he was serving time for armed robbery. Somewhere in the midst of all that he got involved with Michelangelo Antonioni, and had a brief spell as an actor; apparently the casting director for Zabriskie Point (a film so hated at the time of its release that it has its own entry in a book called The 50 Worst Films of All Time, alongside MST3K favourite Eegah!) saw Frechette standing at a bus stop shouting "motherfucker!" and decided he was perfect for the lead in the film. Frechette himself was fairly unimpressed with the finished product - you can see him and the future Mrs. Dennis Hopper, co-star Daria Halprin - who is now an "expressive arts therapist," among other things - rather painfully interviewed on Dick Cavett about it, here. (You can also follow that up here, thanks to the energies of fellow bloggers on the sites Classic Television Showbiz and Chained and Perfumed - who collects an impressive amount of cool Zabriskie Point stuff, including the Films and Filming cover below, here). Frechette apparently described the movie as "a big lie and totally alien." That's helpfully quoted in the 50 Worst Films of All Time, which actually is a fairly useful source of information on the movie, despite its contempt for it; more from Frechette, typed out from the book now open on my computer desk (and omitting a snide aside from the author):

When later asked why he had robbed the bank, Frechette explained, "I am afflicted by a political concscience. We did it as a revolutionary act of political protest. We had been watching the Watergate hearings on television and we saw John Dean tell the truth and we saw Mitchell and Stans lie about it. We saw the American people sinking deeper and deeper into apathy and we felt an intense rage. They did not know the truth and did not want to know the truth. We know the truth and wanted to show it to them. Because banks are federally insured, robbing that band was a way of robbing Richard Nixon without hurting anybody."

...He later said, "There was no way to stop what was going to happen. We just reached the point where all that the three of us really wanted to do was hold up a bank. And besides," he added, "standing there with a gun, cleaning out a teller's cage - that's about as fuckin' honest as you can get, man!" 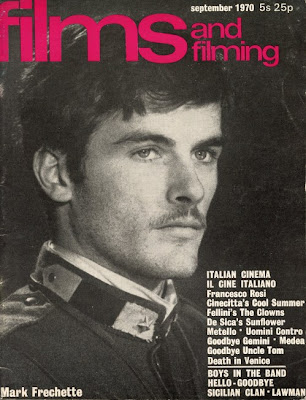 A short while later Frechette was found dead in the weight room of Norfolk State Prison in Massachusetts, a death which was deemed accidental. I hadn't realized that there was much else to his story, but this morning's internet pokeabout netted some interesting fruit. I noticed an Italian film listed as an upcoming release by DVD Beaver, and that the director was Francesco Rosi. Rosi directed the fascinating crime film Salvatore Giuliano, based on a screenplay by Marxist screenwriter Franco Solinas (...who also fascinates me; Solinas wrote most of Pontecorvo's films, a few of Costa Gravas, was involved in projects by Joseph Losey and Nicolas Ray, and also wrote/ co-wrote two damned good spaghetti westerns, The Big Gundown and Tepepa, and one not-so-good one, The Mercenary, which, trivially, features Jack Palance as a character named Curly, some 20 years before City Slickers, and who actually has curly hair!). Salvatore Giuliano is about a bandit who may or may not have been a revolutionary figure; the film probes the question of how to properly regard him by structuring a film around his activities without actually containing him as a character (the film begins with his assassination, and 99% of the time we see him in the film, he is lying dead on the sidewalk). The question of whether crime can have political dimensions had much more currency in the 1960's and 1970's, as Frechette's quote amply demonstrates; it's probably for the best that the Occupy folks aren't going around robbing banks.

Anyhow, it turns out that Francesco Rosi went on to make a film called Many Wars Ago (Uomini Contro - Amazon link here; the film screened in 2010 at the Cinematheque as Just Another War), and that that film co-starred... Mark Frechette! Yep: he appeared in two Italian movies after Zabriskie Point. I've seen neither, hadn't realized they existed, but now one of them is due out on DVD and Blu-Ray on October 16th. Doubtlessly Frechette will be dubbed into Italian, but hey, it's not really his acting abilities that draw me to him (although I think he does just fine in Zabriskie Point, to be honest). Nice to see that there are still cool new video releases happening; Raro Video joins Olive Films on my "DVD labels to watch" list...

frechette is a legend, i saw him in zabriskie point and uomini contro and was great, now need to find the third film (la grande scrofa near). good article

Thanks! It's nice to know that someone else cares about this stuff...!

I notice (in addition to the band/ bank typo, which I'm too lazy to go back and fix, since it will be obvious to any attentive reader that it's a typo) that I omit mention of Franco Solinas' involvement in A Bullet For the General (AKA Quien Sabe) another great political spaghetti western... oops! Another great film, though nothing to do with Frechette: http://www.imdb.com/title/tt0061429/?ref_=sr_1