Three Documentaries in the 2012 VIFF 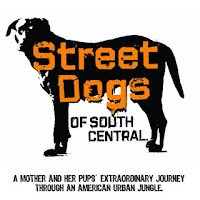 Turns out that Street Dogs of South Central isn't at all what I thought it would be. Given the subject matter - stray dogs roaming the streets of LA - I expected something gritty and downbeat, perhaps taking poverty and urban desperation as a theme, but exploring it indirectly, by means of animals. Instead, I discover, the film is a fairly sentimental Animal Planet documentary, with a syrupy score, a family-friendly, Morgan-Freeman-esque narration from Queen Latifah, and, a few dogfights aside, little of animals experiencing pain or hardship: there are scenes emphasizing the peril of crossing the road, for example, but none of dogs actually getting hit by cars, or of canine roadkill. When one pitbull the narrative follows is "put to sleep" at a shelter (without any critical commentary on the decision), it occurs tamely off-camera; even images of dogs "marking their territory" are few and far between. Some viewers, seeking heartwarming pooch footage suitable for family consumption, may feel that that's just as well, but - especially if you compare this film to something like Leviathan - this is a highly sanitized vision of these animals' reality, and one calculated to please, rather than upset or provoke. There are audiences for whom it would still be perfect - it might be a film to bring people who own calendars with puppies on them, say (and I'm thinking of my Mom here, and I bought her that calendar, so I don't mean to be snooty), but - how to put this nicely? - Street Dogs of South Central represents a highly, umm, populist version of cinema that is not really of great interest to me. They do a good job of following various groups of dogs long enough to build a narrative around them, I'll grant the filmmakers that much... 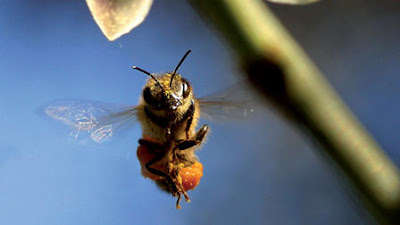 A much, much more interesting animal-themed documentary is More Than Honey, about colony collapse disorder and the impact of contemporary agribusiness on bees. The film has unbelievable microphotography of the insects in question - revered insect photographer Ken Middleham has nothing on what these filmmakers manage, though who knows what digital trickery is involved: the film offers beautiful close up tracking shots of bees in flight, a camera rotating 360 degrees around the birth of a drone, bees filmed working inside their hives, and much more, images which will be jaw-droppingly exciting for bugpeople out there. It even has some startling images of humans, from an old European beekeeper who cuts down a branch with a swarmed colony on it so that it falls into his box, without his wearing the slightest trace of protective gear, to a group of Chinese farmworkers hand-pollinating an orchard in a field too saturated with chemicals for bees to live.

In addition to providing abundant interesting information on bees - from the bee "dances" used to communicate information to bee mating practices to footage of the Varroa destructor mite at work- the film is unafraid to adopt a critical perspective on the harvesting of honey and the various conditions that have led to colony collapses, which it treats as no mystery whatsoever. I can remember rolling my eyes to discover that certain vegans out there eschew using even honey, but when you see how contemporary bee husbandry is practiced, it's as industrialized and alienated and animal-unfriendly as the most brutal slaughterhouse. I had some pastoral cottage-industry fantasy in my mind about how bees were treated, had no idea that there were migrating beekeepers who drive their colonies all over the country in huge trucks, stacked in their boxes in the hundreds of thousands, to hit different crops as they flower, with the bees suffering in the heat and darkness as they travel, imprisoned, for hours on end; when various colonies turn out to have died en route, it's really not that shocking, given the stresses the animals have been subjected to. It's almost enough to put you off your honey (and if that isn't, close-ups of bees secreting honey with their mouths might do the trick; I was unfortunate enough to be drinking tea sweetened with honey during that scene, and admit to having had some difficulty finishing it). Somewhat surprisingly, the film also takes into account the dreaded Africanized honeybee - the "killer bee" - showing that these bees, in the wild, are doing vastly better than their domesticated cousins, and may represent a wild hope for the bees of North America; I don't think I'd seen killer bees depicted in a positive light before. 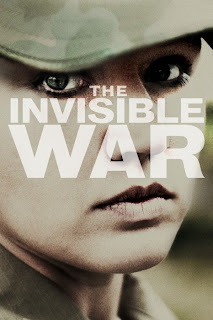 To turn to the human realm, the newest documentary from Kirby Dick also plays the 2012 VIFF, The Invisible War. The film deals with the ways in which rape in the US military - mostly of women, but also of men - is treated as an "occupational hazard," and often not investigated or punished. It has many, many brave testimonies from women (and a few men) whose lives and careers were derailed when they were sexually assaulted by their "brother soldiers," and who were then ignored, persecuted, and/ or treated as having invited the assaults when they complained to their commanders, who generally have a vested interest in keeping such crimes quiet. The film - brave, angry, and important - urges viewers to sign a petition to change the way sexual assaults are investigated in the US military; you can read more about it on the film's official website - apparently this documentary has already had a positive social impact...

One further VIFF film that should be on everyone's radar is what could ALMOST be billed as "the new Monty Python movie," A Liar's Autobiography: The Untrue Story of Monty Python's Graham Chapman. Animated and in 3-D, the film is based on Chapman's memoir, and draws on audio recordings Chapman made of the same shortly before his death. Monty Python has not functioned as a troupe since Chapman's death, but the fact that this film draws on Chapman's voice and writings was enough to convince John Cleese, Terry Jones, Terry Gilliam and Michael Palin to participate; the only living Python not present is Eric Idle. Not having read Chapman's book, I'm curious how the film will handle his homosexuality, a topic I'm unaware of the Python's dealing with in a public way (though they may have - I'm hardly a Python completist). The dead one speaks! 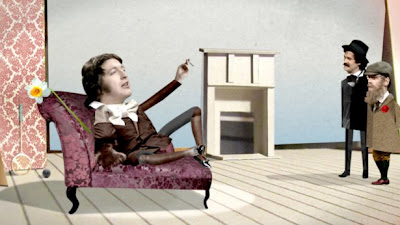 Posted by Allan MacInnis at 1:08 AM