Carbon, Carbon Everywhere (at the 2012 VIFF)

Two VIFF documentaries deal with carbon credits this year, to very different effect. If you don't really know how carbon credits work - or if you're at all concerned about things like access to clean water, indigenous rights, greenwashing, or global warming - these are very interesting films to watch, even though in the end you may suspect one of them is a little less than honest... 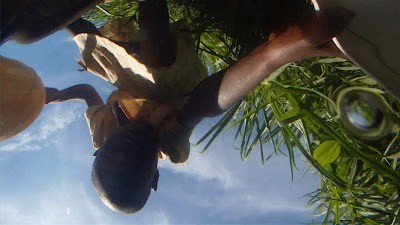 One, Carbon For Water, shows a distressing cycle of destruction at work in Kenya, where, as the film sketches out, because of global warming, there is less rain. Because there is less rain, the water that can be found has higher concentrations of bacteria. Because of the bacteria, you have to boil any water you collect before drinking it: but in order to do that, you need to have firewood, which means cutting down trees. Fewer trees means less rain, and less carbon dioxide removed from the atmosphere, which means more global warming. The cycle then repeats from the beginning, but with ever greater desperation. The Western Province where the documentary is shot is presently still quite lush, and indeed, the film is apparently the source for (or at least the inspiration of) the trees-and-sunlight image on the cover of the new VIFF catalogue, but Kenyans interviewed say the area will eventually be reduced to desert if the current cycle continues. 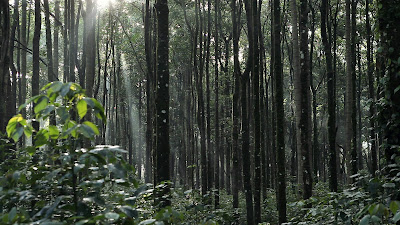 All of this is interesting and instructive, and rather beautifully filmed, but in the last five minutes (the film is only 25 minutes long, and paired with another short feature, Into the Gyre, which I'll get to presently), Carbon For Water changes tone from the usual dire-warning mode of address of such documentaries to that of an inspirational infomercial for a for-profit company who has found a way to amass "carbon credits"- a sort of industrial kickback that allows polluters to continue to pollute, as long as they bankroll enviro-friendly projects in the developing world - by intervening in the situation in Kenya. They've done this by going door-to-door installing water filters, so that trees no longer have to be cut. Maybe I'm just not used to documentaries like this opting for a positive ending, and maybe the interview subjects are now all happily using their filters, not getting sick, and no longer sending out young girls to spend the whole day collecting firewood - but I felt instant skepticism, since you suddenly start to wonder if the film was somehow bankrolled by the people behind the filter project, for its PR value; it takes on the glowing, positive tone of certain tar sands commercials of late, and leaves you wondering if those filters are actually going to work, if the company will replace them when they wear out (or make other gestures at long-term follow-ups), and if the benefits of having them installed will actually somehow offset, in real-world terms, the greenhouse gases that will be released in the north as a result of the carbon credits trade-off. Call me a cynic, but at the end of the film, the more positive in tenor it got, the more doubt grew in me... 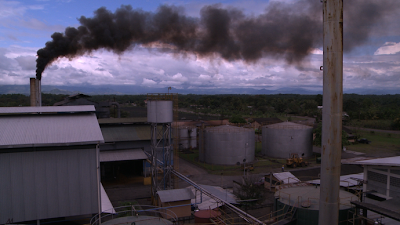 While the exact situation dealt with in Kenya is not mentioned in The Carbon Rush, these sorts of suspicions are amply confirmed by it. The film - also featured in VIFF 2012 - is about the way that carbon credits are being exploited in the southern hemisphere to create only superficially green projects, themselves for profit, which are somehow seen as excusing continued emission of greenhouse gases in the north. The film  hammers home circumstance after circumstance - in India, in Brazil, in Honduras, in Panama - where new projects have been created that are in fact less sustainable than the systems they replace, and involve, in most cases, either displacing indigenous peoples from their land, depriving them of a means of income, and/or having them harassed or killed by private security forces policing these new developments, who couldn't give a damn that they're supposed to be promoting a media-friendly public image for the mega-corporations behind them. One concrete example, pictured below, involves the recycling of garbage in New Delhi - a well-established practice that once provided a livelihood for many people; it has been replaced, thanks to the "rush" to exploit the carbon credits market, by a system of burning garbage for fuel, which is vastly less environmentally friendly and which profits not the locals, but the corporation behind it (and the big polluters who end up the beneficiary of said carbon credits). 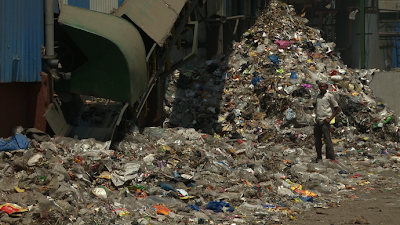 Unlike Carbon For Water, there is no feelgood ending to The Carbon Rush; in fact, the situation in each place the filmmakers visit seems pretty grim, and the film shows in no uncertain terms that much that is being sold to us as "green" is just the same old exploitation of the developing world. An angry, strong film, narrated by Darryl Hannah, well worth watching.

One final thing about Carbon for Water, though - the first film mentioned, the one I came not to trust: lest I dissuade anyone from seeing it, it is paired with another documentary that is very much worth seeing, which also is far less apocalyptic in tenor than one might expect it to be, without seeming at all compromised. Into the Gyre - official site here - is about the North Atlantic Garbage Patch - an area in the Sargasso Sea where floating garbage, especially plastic, has gravitated in considerable quantity. This film comes as a considerable relief to me, as I'd bought into the exaggerations of the media and Camp Doom-n-Gloom that said garbage patch was some kind of gigantic floating wasteland that could support your body weight, an island of accumulated refuse, drifting in the ocean and growing ever larger. Turns out that this is far from the truth; there is indeed a troublesome amount of plastic - mostly broken down into tiny bits - floating in the gyre of the title, but as the film shows - as it documents the efforts of a scientific team to measure the plastic present - the ocean still looks very much like ocean: it's nowhere as bad as you may think. Even if the circumstances are troubling indeed - fish caught are revealed to have many small chunks of plastic in their digestive system, for example, which will then work their way up the food chain - I was positively cheered to discover for once that things weren't as bad as I thought they were. After The Carbon Rush, this was a pleasant surprise.
Posted by Allan MacInnis at 1:11 AM