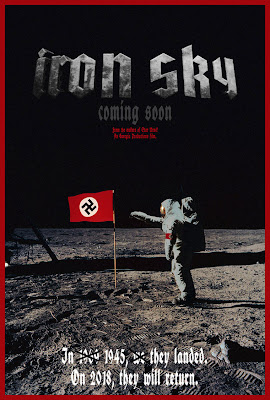 The Vancity Theatre website is being presently rejigged, and as I write, does not have listings up for next weekend. A film many of you will have heard of, Iron Sky - the long awaited black comedy about UFO-flyin' moon Nazis, opens there on Friday. It stars everyone's favourite Dracula, Udo Kier, and boasts a soundtrack by Laibach; since, based on the above, I am utterly keen to see the film (and theatrically - not on some jittery streamed screener!), I'm deliberately keeping myself ignorant about further plot details, but do you really NEED to know more, to know you need to see it? Meantime, just in case it doesn't make it onto the Vancity website in the next couple of days, here is the blurb the theatre sent me, describing the film:

***
Largely funded and partially written by scifi fans from around the world, Iron Sky is a pitch black comedy about Nazis from Space.

In the last moments of World War II, a secret Nazi space program evaded destruction by fleeing to the Dark Side of the Moon. During 70 years of utter secrecy, the Nazis construct a gigantic space fortress with a massive armada of flying saucers. When American astronaut James Washington (Christopher Kirby) puts down his Lunar Lander a bit too close to the secret Nazi base, the Moon Führer (Udo Kier) decides the glorious moment of retaking the Earth has arrived sooner than expected. Two Nazi officers, ruthless Klaus Adler (Götz Otto) and idealistic Renate Richter (Julia Dietze), travel to Earth to prepare the invasion. In the end when the Moon Nazi UFO armada darkens the skies, ready to strike at the unprepared Earth, every man, woman and nation alike, must re-evaluate their priorities.