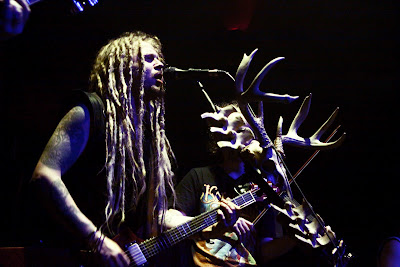 Korpiklaani at the Rickshaw, by bev.davies, not to be reused without permission

So after last year's Straight interview with Finnish folk metallers Korpiklaani (official site here), I had full plans to put up a fuller version of my interview with bassist Jarkko Aaltonen on The Big Takeover website, maybe mixing in some material on Scythia and Arkona, who were also on that bill. But one thing led to another - more pressing commitments, university papers, and so forth, and by the time I even got round to seriously considering getting back to my Jarkko transcription, there was a new Korpiklaani album, Manala, coming out, and were on their way back to Vancouver!

Anyhow, with apologies for the long delay, here are a couple of cool photos of Korpiklaani that bev.davies took at their last show in town, and a bit more of Jarkko. I will likely not be at Korpiklaani's September 9th show, once again at The Rickshaw, but any of you who want an exuberantly fun, internationally-minded, polka-influenced Finnish Pagan metal band to bounce up and down and get grinnin' drunk to should go check it out - this is some lively music indeed (Esteemed colleagues Tyr, Metsatoll, and Moonsorrow open). Official video for the new Korpiklaani single, "Rauta" ("The Steel") - Finnish version here, English here (the Finnish is way cooler... and whatta great bassline...). 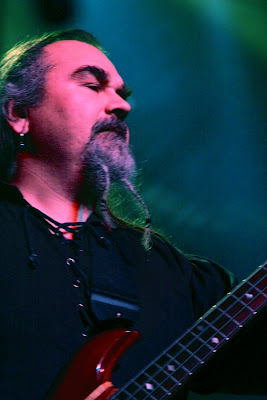 Jarrko Aaltonen, by bev.davies, not to be reused without permission

AM: I'm a bit jealous of European folk metal bands, you know? Short of appropriating from aboriginal peoples, we white folks don't have much in the way of our own authentic local Pagan traditions to borrow from. So we end up with The Lord of the Rings and D&D and made-up crap like Wicca and Satanism.

JA: Yeah, but on the other hand, as a sociological experiment, it's a fine piece of art. You take people away from their roots and see what they come up with.

JA: ...and extreme Christianity, as well!

AM: Good fun. So, like, I should get clear on this - how do I properly pronounce your name?

AM: Mm. The Japanese do a similar thing. "Yark-ko."

JA: I know it's difficult - it always seems to be really difficult for foreigners, regardless of their language. English speaking people are not alone with their problem with the double consonant.

AM: Good, then it's not a stupid question, at least. I'd like to avoid those, if possible. I was watching Bill Zebub's interview with you on the Pagan Metal DVD the other day, and...

JA: Yeah, but that guy has made an art from being an idiot. I mean, nowadays if we start getting really really stupid questions, you know the whole idea of the interview is not to be informative but funny. And I don’t mind doing those - it’s another form of interview.

AM: Right. I wonder if there are any typical misconceptions I should steer clear of, though?

AM: I bet. So let me ask you about a couple of songs... I'm curious about the song "Surma" (off Ukon Wacka, the album Korpiklaani were then touring, further discussed in the Straight article). There's a hint of nu-metal or hip hop in the vocals. Was that a concious decision, to expand the band's audience, maybe?

JA: If you here something that you didn't expect... you can be sure that it was not a deliberate hint to any kind of direction. I know that in the past few years we have become better songwriters - we've gotten more experienced - but it's not really deliberate; it's just that when you get better at something, you can play with your skills, and then sometimes you come up with something that sounds good to you, even if it's a bit different from what you did previously.

AM: The version I have of the album also has a cover of Motorhead's "Iron Fist" on it, too... How did that come about?

JA: We needed a bonus track - that was something the record label demanded, and we were already in the middle of touring, at that time. The album was done, and we were away from the studio, and we just needed one song. Then we were like, "Do we have a song?" "Nooo." "Do we know any covers?" And then I said, "Well, we did play 'Iron Fist' live a few times - maybe ten times, a few years ago, and we all know that, so let's do that." So we went back to the studio for a day or two and did that, quickly. Everybody knew the song, we didn't have to rehearse or anything.

AM: Any reactions from Lemmy?

JA: I doubt that he's ever even heard the song.

AM: Mm. Well, it's great. It's nice to hear that song with a fiddle in it!

JA: Yeah, we think that we have a bit of a different approach to it - it's pretty close to the original, but the drums and violin make it a bit different! 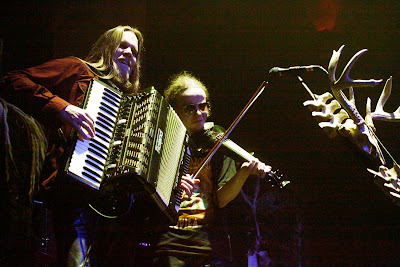 Korpiklaani, by bev.davies, not to be reused without permission

AM: Agreed. So. The last time you were here (and, actually the time before that), you played the Rickshaw, which is notoriously in a very bad part of town.

JA: Yeah, we sort of realized that the last time we were there.

AM: Were there any experiences or stories that came from that?

JA: Well - not really, although - I was in the city centre, whatever it’s called, this sort of walking district there, and I was with a friend of mine, and we were thinking that we need a hotel room so that we could shower and stuff. But we know that we have to get that from closer to the venue, so we go back to the venue, and we start walking this one street [and we’re thinking he’s talking Hastings, here] trying to find a decent hotel that has free rooms. And in the end we end up 200 meters from the spot that we left in the city centre. We were back there! Because as you said, that district around the Rickshaw is not really the fanciest. Not that we were looking for a presidential suite… 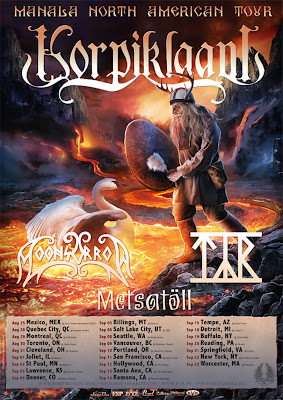 A tip to Korpiklaani or other touring bands coming through Vancouver - cheap rooms with communal showers and toilets down the hall are available a few blocks from the Rickshaw, at the St. Clair Hotel. It has bunk beds and a hostel-like ambience but no hostel card is required and it's clean and safe, at least in my experience. (It's also extremely Spartan and lacking things like TVs, but who needs those, anyhow?).
Posted by Allan MacInnis at 2:19 PM