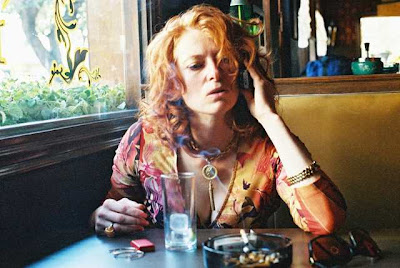 Stumbled into two winners at the video store this week: Julia, with Tilda Swinton, and something I'd never heard of called The Local, written and directed by, and starring, a guy I'd also never heard of before called Dan Eberle. Both are high-stakes dramas; Julia is the more startling of the two, starring an astonishing Swinton as a smart, cynical alcoholic barslut in a downward spiral who makes a desperate bid for self-salvation. It bears such strong and unlikely resemblance to a certain Cassavetes' film - said to have been its inspiration, if you must know - that I've got to steel myself lest I give anything away, since - if you're prepared to trust me - this is really a film you'd be best to enter into cold; normally, the term "plot twist" suggests clever last-minute gimmicks designed to give you a satisfying feeling of having been fucked with, something akin to a punchline, but Julia takes so many surprising turns in its 140 minutes that it almost requires us to invent a new term for them. I'd always thought Swinton an interesting actress, but never have I seen her show the breadth of her talents so powerfully in a film - if the Academy Awards meant anything, this would have been an Oscar-winning performance. 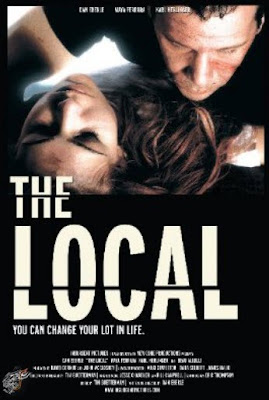 The Local is a bit harder to describe. It's sort of as if Hubert Selby Jr. wrote an action film: it involves a spiritually scorched drug mule/ bagman, deep in self-punishment in a failing bid to atone for untold sins of his past, trying to stay clean and stay moral in the ruthlessly Darwinistic Brooklyn neighbourhood where he runs his errands. There's a bit of a stylization of the "language of the streets" that it represents, so much so that I wonder if people who've been-there-done-that would find it phony; but, I mean, ask Chris Walter about that, not me (it's the sort of film I might point out to him at some point, tho'). Still, it's an engaging piece of cinema - not too original, necessarily, but alive and sincere and moving, better than the average thing you rent.

Then again, does anyone actually rent movies anymore, or do y'all just wait for them to pop up on Torrent sites? I bet Julia can be torrented... wouldn't think that The Local is online, tho'.
Posted by Allan MacInnis at 9:45 PM

I totally agree with you on "Julia". Saw it the other day, and it's an excellent movie.