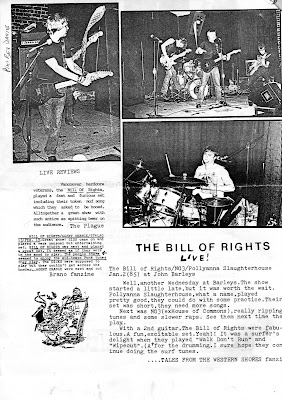 Vancouver punk photographer/ preservationist/ low-key legend Bev Davies has posted one of The Bill of Rights' best songs, "The Core," on Youtube, along with a photo of hers (the piece may be amended to include other photos at a later date). The Bill of Rights (or T-BOR, as Bev tells me they were sometimes known) were one of the few of the second wave of Vancouver punk bands whom I actually saw (along with, I believe, the Spores, Slow, Death Sentence, and the House of Commons, who I think actually hailed from Victoria), and I had the single with this song on it back in the day. I nabbed it off Soulseek, in the files of someone with a goodly amount of T-BOR material (and lots of other rips of vintage Vancouver punk vinyl - Another Kind of Blues, some Spores stuff that didn't make the CD comp, and so forth); I burned a CD, gave it to Bev, and this is what she did with it! Preserve punk history! (...anyone out there want to publish a book of Bev's photos?).
Scans courtesy of Bev! 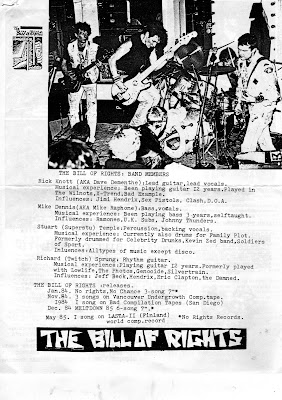 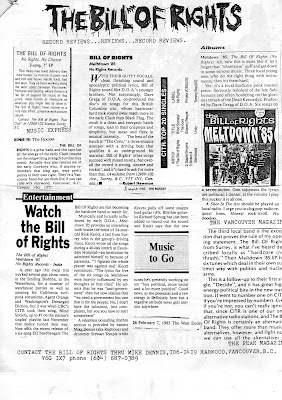 Posted by Allan MacInnis at 8:21 PM

i'd buy a book of bev photos.

hi, I just posted another song by The Bill of Rights.
C-9
http://www.youtube.com/watch?v=cUSWcUeS8sc

Thanks so much for posting this. Mike Dennis was a wonderful guy. Anybody know what he's up to? Yes...Bev needs to publish her photos.

speaking of second wave Vancouver punk, I just posted some rare Death Sentence, House Of Commons and Fratricide on my blog. Forbidden Beat, AKOB and perhaps some Bill Of Rights coming soon