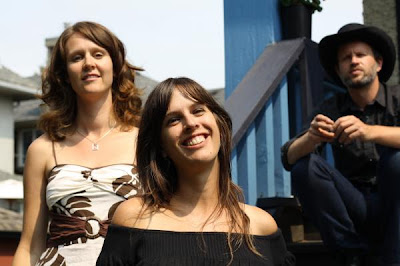 Okay, so: truth is, I don't really listen to a lot of female-fronted alt-country/ "roots music" stuff. I don't listen to Lucinda Williams, I don't listen to Mazzy Star, I don't listen to Cat Power or the Cowboy Junkies or Feist (is she even roots music?). And on March 19th, with the Residents in town (see below), I'm NOT going to be at Cafe Deux Soleil to see Pawnshop Diamond (Myspace here). But - having shared the same dayjob with the main singer/songwriter in the band for a few years - I have spun their CDs, and think they're definitely wayyy above the mean for this sort of music; Katie Ormiston is a helluva songwriter, and even if I didn't know her, and I DID listen to Lucinda Williams, Mazzy Star, Cat Power, the Cowboy Junkies and/or Feist, I suspect I probably would listen to Pawnshop Diamond MORE... and not just because they're a home team band, either. Those of you in the city Saturday who are not craving the weirdness of the Residents might want to check these guys out - if only to say that you've seen a really damn good Canadian band that could stand to be known by a few more people; and if you don't believe me, check out Adrian Mack writing about 'em in the Straight.
Posted by Allan MacInnis at 5:57 AM