Good Residents review... plus behind the scenes Residents discussion with Femke and others 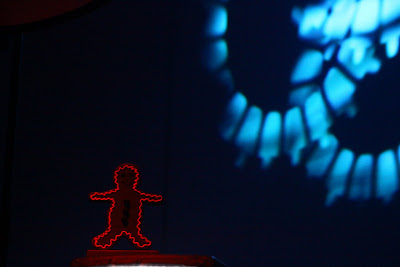 The Residents at the Rickshaw, Vancouver, March 19th 2011: detail by Bev Davies, not to be reused without permission

Good, very descriptive Residents review from Gregory Adams in the Straight, including things I did not know or would not have noticed. What's worth adding, that I do know and had noticed? "Bury Me Not on the Lone Prairie" - or whatever the actual title of that is; "The Cowboy's Lament" is the one I guess it properly deserves - was performed during the encore, and...

...Oh, heck: I think I'm just going to share my thoughts (bearing in mind please that I enjoyed the show) as emailed in two installments earlier to a Residents lover in the USA:

Part the first, 8:50 AM, Sunday morning March 20th (the early AM after the show, sitting in a Vancouver netcafe):

Interesting show. Much more of a rock concert than I expected, and "Randy" is a much more powerful performer than I'd realized - he really held the audience's attention through his stories, even tho' rock audiences are usually drunk, stoned, and/or stupid and not that sophisticated... he ignored the stupid shoutings from the pit and kept the stories going, was very physical in his performance... very interesting. The set included "Semolina," "Six More Miles," "The Old Woman," the pigeon song from ANIMAL LOVER, and a few others I recognized but couldn't stick a name on. Of Randy's Ghost Stories, "Talking Light," "Milton," and "The Unseen Sister" all featured...

She replied by asking me if I'd enjoyed the show, and I replied, leading us to:

Part The Second, 8:17 PM, Sunday evening, March 21st, sitting at my home computer in my underwear:

Well, you know, it was kind of hard to process? It was basically a one man show with multimedia enhancements - the guitarist and the laptop fellow, however much they did musically, weren't much to watch, so it really wasn't quite the same as watching a band. "Randy" had a great, powerful voice, really commanded attention, and was gesturally fascinating, using his hands -and whole body, really - to great effect; I wonder if he's been a teacher in real life, or if he's had training in theatre or such, or if he just developed this confidence through touring...? However, his routines were obviously a matter of memorized performance, which is odd to see at a rock concert, where the between-song patter is typically spontaneous (and when it isn't, it usually means that you're being bullshitted - Leonard Cohen, when I saw him here years ago, picked up some roses conspicuously left on the stage and made a comment about how under the influence of LSD he "once gave a sermon to creatures such as these" - or something like that - and it struck me as quite a phony and rehearsed moment; even tho' it may not have been, it had me rolling my eyes - "give me a fuckin' break, Leonard"). The whooping and annoying chattering of the audience, their oddly misguided attempts to interact with the band (someone shouted "Santa!" a few times as some sort of request or in-joke - not "Santa Dog," but "Santa!"), the fact that the venue was such that we all had to stand (being jostled pretty much every song by at least one person pushing through this way or that, making full focus impossible), and the general distractability that came from (portion omitted) didn't do much to enhance the theatrical/multimedia numbers, which would have been better processed seated in a more highbrow venue (or sitting alone at home watching them on DVD); rock concert environments aren't the best place for reflection. Also, the "Milton" video was really hard to understand live, the way the voice had been processed... Meanwhile, the really forceful and striking "rock" songs were kind of shocking as a departure from my understanding of the band's nature [being as it was the first time I've seen them live] - but hard to respond to and process as rock songs per se, since the context was still one of quasi-theatre; the rawness and forcefullness of rock were there, but enshrouded and rendered non-transparent by the heavy layers of mystery, irony and artifice, a distance there not usually present at mere rock shows that made things more confusing than they usually are... It was equally hard to read it as a commentary ON rock, the way The Third Reich'n'Roll is, however, because it DID partake of a lot of what makes rock work, regardless of how much more it complicated matters, so it kind of stuck me in a grey zone, intellectually. The stories and between song routines were, of course, interesting (if the whole point of the mirror people spiel remained somewhat mysterious), and I greatly enjoyed some of the music with my eyes closed, when I COULD concentrate (alas, that was not at all during the version of "Six More Miles," one of my favourite tunes on Lonely Teenager, a great reworking of a Hank Williams song that I somehow couldn't enter in this context), but only one moment of the show had a really powerful emotional impact - ending "The Old Woman" with an abrupt, forceful wall of silence on the last word of the line "tell me if anyone - CARES." I think, overall, I enjoy experiencing the Residents more on CD or DVD than I did live. That isn't really a commentary on them, tho' - it was a very well-put together show, Randy really put his back into it, and the audience all had fun (it was packed, btw) - I would go see them again in a second (and I really, really want to hear more live material by them, since they really ARE a different beast live) - but if I had a choice, I'd rather see them in a seated theatre next time... I think I'd have to see them live a whole lot more frequently than I'm ever going to have a chance to to REALLY get on the bus, tho'... [ie. because only then might it all start making perfect sense to
me.]

Oh - I bought a Smell My Picture, they had several.

Now, bear in mind that the above is a private reaction, not a public review; I'm not commenting on the show so much as confessing that I didn't understand it enough to enjoy it, exactly; which has nothing to do with "not enjoying it," in case that's not clear. I mean, if an alien being landed on the ground at your feet, knelt between your legs, extruded three purple, hairy tongues and began passionately licking your bellybutton, would you enjoy it? Would it turn you on or off, and if so, how would you feel about it on "higher" levels? Whatever the answer might be, my guess is, it would take more than one repetition of such experience to be able to fairly evaluate it. Until then, the best you could really say would be, "...uh, I think so... it was interesting..." Or maybe just a slow, thoughtful "I don't know..."

You know who had less difficultly processing things? Femke van Delft. Not only does she take great photos, she also sometimes completely outdoes me in her perceptions of shows, leavin' me slapping my forehead in dismay: "I'm supposed to be the writer!" She processed the show thus:

Kinda like Jan Svankmajer meets Jello Biafra... it was totally Czech animation, and it was really deeply sad. It was funny, but it was absolutely black and sad, all about aging, getting old, dying... it was an amazing show, and it defied genres. It was quite profound work, and, like, God, if you can sort of cruise into your mid-60's, kicking and screaming like that? ...It's amazing. It sets a good example for aging. I really enjoyed the show, it was really impressive...

...which is a very clear and lucid explanation of the show, quite in tune with Hardy's observations in my Straight interview. Other thoughts from attendees or otherwise are welcome, including from those who wrongly assumed that the show wouldn't start until past 10 (with doors at 8, with guests who never materialized announced on the ticket), and thus missed a big chunk of the show, since the band went on shortly past 9:30...

Oh, by the way, people wanting to know more about the Residents are directed most earnestly towards the liner notes from the late-90's "bookcase-y" CD reissues of The Third Reich & Roll and Tunes of Two Cities/The Big Bubble. They are, as someone else observes in the thread linked below, likely the most revealing writings ever put together on The Residents, because they're coming from the the band itself (or its immediate vicinity); they aren't trying THAT hard to be secretive, folks (which is why questions about their identities are somewhat unnecessary, a tiresome game of pin-the-name-on-the-Resident that kind of misses the overall point that it probably doesn't even bloody matter!). A bit of discussion on the backstory revealed in said notes, including the tale of the Greasy Weasels, can be found here. 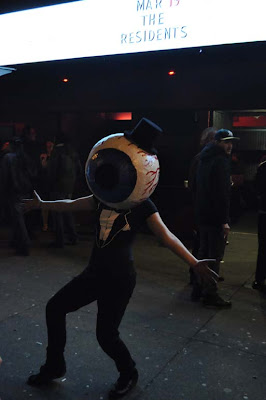 The biggest Residents fan at the Vancouver show poses for Femke van Delft, not to be reused without permission.

Posted by Allan MacInnis at 3:30 PM