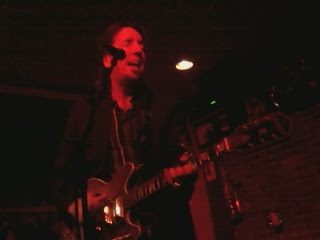 ...and speaking of folky things, I took one my few digressions to appreciate the form live tonight, to see Stephen Fearing and Andy White at Hermann's jazz bar in Victoria. The two play again on Sunday in Vancouver, at the St. James Community Hall at 3214 W. 10th Avenue, so it seemed worth mentioning the gig to people ASAP. According to Stephen's stage patter between songs, they met backstage at the Winnipeg Folk Festival in 1998 (Fearing: "it was one of those rare instances where you meet a fellow musician backstage and have a conversation longer than 'Hey, how you doin', I really love your stuff'") - and have been writing songs together for ten years. However, they're touring together for the first time; apparently tonight was the second show they've played thus, with White (a Belftast-born Australian resident whose past collaborators include New Zealand's Tim Finn) on bass, 12-string acoustic, and percussion - and Fearing (a Dublin-raised Vancouverite who co-founded Blackie and the Rodeo Kings, losing a bit of his Irish accent visible on his early recordings and taking up an almost southern drawl) on a variety of acoustic and electric guitars. It was a delightful night; for a Fearing fan, the high points were a powerful, near-rockin' original, "Black Silk Gown," and a spur of the moment request for a song that he apparently wrote for Tom Wilson called "That's How I Walk," which evoked Townes van Zandt's "Rake" and would have been a fit song for Johnny Cash to cover, with its ambience of slightly angry, slightly dark, possibly (self?-) accusatory brooding. (I could only find the Wilson version on Youtube, alas). The highpoint, songwise, of the songs they wrote together for their new CD - and certainly the most complex number - was probably "Mothership," which included White (an equal partner on most numbers) providing interestingly distorted backup vocals, often overlaying Fearing's verses with his own. Their warm and witty stage patter - including Andy White's delightful anecdote about a young girl's imaginary female rock band friends - had the audience laughing throughout - it was a sold out show, and one I was glad to be at... so... 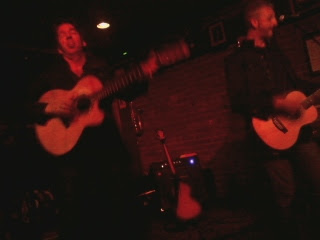