The Spores' Schizofungi on eBay! 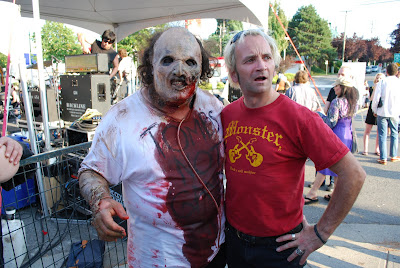 Spores' singer Danny "Shmanny" Nowak with a certain local zombie. Photo by Bev Davies or Femke van Delft: they were both there, and I kinda forget which took this picture...

One of my very favourite Vancouver punk LPs, The Spores' Schizofungi combines anarcho-political rants with a darkly-humoured, acid-tinged love of B-grade horror films, most memorably brought together in "House of Frankenstein" (downloadable for a mere 49 cents here); it also features several songs - like "Tommy (The Curse)" and "Chemical Rainbow" - not available on the News, Weather and Spores CD, and terrific cover art. The LP is long OOP and seldom surfaces, but it's on eBay right now! Go to it!
Posted by Allan MacInnis at 10:50 PM