A few upcoming gigs of note 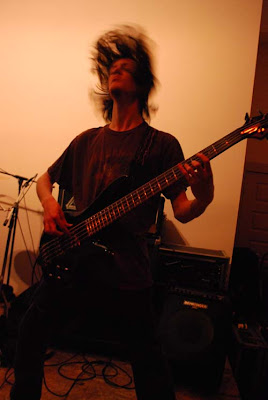 Paradosis bassist rocks out, photo by Femke van Delft, not to be reused without permission

I'd already posted something on the Acid Mothers Temple gig, March 29th at the Biltmore; a few other gigs have caught my attention this week. China Syndrome, fronted by 64 Funnycars' Tim Chan, do an engaging power pop highly reminiscent of the more muscular tunes on the first two Big Star albums (tho' they also mention the Replacements, Guided By Voices, and The New Pornographers in their self-description); they'll be playing a benefit concert for Japan, April 1st, along with Payday Millionaire and Dow Jones & the Market Shares. That's at Lanalou's, Japantown, 362 Powell St. Also on the first, Black Wizard, a stoner doom/ blues band whose Myspace songs are kind of fucking terrific, plays the Interurban Art Gallery, next door, I believe, to Scratch, at Carrall and E. Hastings. For those of us metal freaks enmired in the suburbs, meanwhile, on April 2nd, there'll be a Pitt Meadows fundraiser for AdStock, featuring Nylithia, First Reign, Northern Guard and Paradosis - four bands for $10, at the Pitt Meadows Heritage Hall, 12460 Harris Road. Nice that not every cool gig requires me to travel to the city... tho' that Black Wizard show is looking kind of appealing... 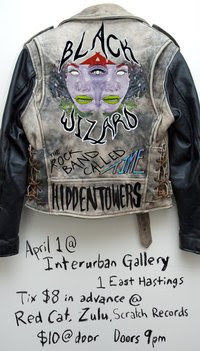 Posted by Allan MacInnis at 2:53 AM