Michael Turner presents Skip Tracer at the Pacific Cinematheque, one night only 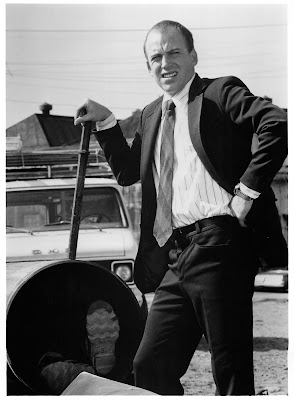 In an anonymous (?) review of the highly regarded 1977 shot-in-Vancouver thriller Skip Tracer, one critic describes it as a "briskly told, well-acted, engagingly shot genre exercise" - so much so that "one can almost ignore the puerile moral at its base." Well, I guess I'm a fan of puerile moralism, because without the leftist theme - looking at how cruel and compassionless our society can be, through the focusing device of a prick-with-a-well-hidden-heart who works for a finance company - I don't think I'd notice this film at all. It would indeed JUST be a "genre exercise," resonating against various private eye and cop films, probably to a typically reactionary, right-wing end - a sort of Dirty Harry of debt collection; it's the very fact that this film uses the forms of a genre that is usually reactionary to attempt something progressive that makes it really rich. I can see why Robert Dayton - aka The Canadian Romantic - describes it as his "favourite Canadian movie:" Skip Tracer is a smart, involving film - perhaps not quite so pretty, with its rather grim urban interiors, dirty hallways, and many street scenes, but very well-constructed and thought out, with a moody, tense, and unusual score reminiscent at times of Tangerine Dream or maybe Kraftwerk, and a terrific central performance by David Petersen, who vaguely reminds one, in his striking lack of human warmth, of Agent Smith from the Matrix films. (There's also a supporting role by someone named Rudy Szabo, who comes across like a Val Avery character from a Cassavetes' film and makes a strong impression, despite having only this film to his credit on IMDB). Exciting, then, that Michael Turner is bringing the film to the Pacific Cinematheque, where he will be introducing it for one night only, this Thursday, March 24th. 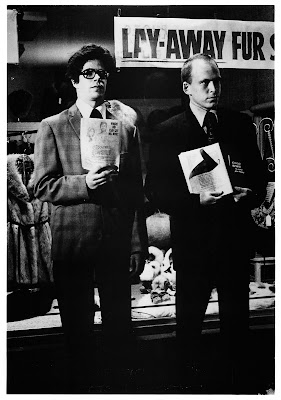 Before proceeding with a brief interview with Michael Turner, an anecdote is in order from Skip Tracer's assistant director, Tom Braidwood, the same man who played Frohike in The X-Files and The Lone Gunmen spinoff (read about that role here). 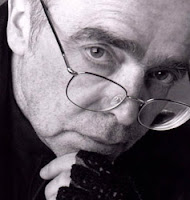 Skip Tracer appears very, very early in Braidwood's filmography (according to IMDB, it's the first film he was ever involved in, but Braidwood is unsure and the internet isn't always reliable). Though it was long ago, he was able to dredge up a memory of the shoot for me. "The one funny thing was - David Petersen, when he did the show, he was obviously a skip tracer in it, and he had to drive around to different places to reposses things or to threaten people; and he didn't have a driver's license, he didn't know how to drive. So that was kind of fun - we had to kind of teach him how to drive, and we would have him just out of frame, so he would coast in in the car and hop out..." (Petersen is expected to attend Thursday's event, as may Braidwood).

Braidwood's story resonates immediately off the stories of the Repo Man shoot in Alex Cox's memoir X Films; according to Cox, Fox Harris, who played J. Frank Parnell, the driver of the radioactive Malibu, didn't know how to drive, either, which made filming some sequences rather challenging. Skip Tracer, made a few years earlier, deals with a similar world as Repo Man, and features at least one dramatic car repossession, but the films are quite different.

When I spoke with Michael Turner, Repo Man did come up - but by way of establishing a contrast. "It was kind of more of an action film than a philosophical film," he noted, as opposed to Skip Tracer, which "does speak to something deeper than it's surface."

The fact that Skip Tracer uses genre conventions to express meaning is significant, Turner observes. "A lot of the more interesting writing and film art - music, even - in the last 30 years is coming out of what we used to call the subgenres. Elmore Leonard writing in crime, James Ellroy's White Jazz - I don't know if you're familiar with the book; it's a marvel of dialogue and lyricism, but this is a crime novel... Quentin Tarantino going into the subgenres to mine them as a material in themselves... Locally we have people like Stan Douglas, who occupy the western and science fiction to speak to today, as a visual artist using the subgenres... William Gibson is I guess another good example. It's across the board" - and Skip Tracer, made in 1977, is well ahead of its time, in mining the thriller to serious ends.

How did Turner come to appreciate the film? "I think I saw the film maybe on BCTV back in the '80's, when they used to show movies after the news, I think around midnight, back in the days when there were two channels and no internet. And I'm pretty sure I watched it one night around midnight and immediately recognized the city and, at the same time, a kind of noir quality to the atmosphere and mood to the film; and, as well, a character that I was seeing a lot in the '80's, a real hard driven person out to succeed at all costs. That was the '80's as we knew it then, and even moreso now: a relentless accumulation, a real 'me-first moment', the 'Greed is Good' era... We had deregulation in North America, fiscal conservatism, markets-over-nations; it was the Brian Mulroney era - this person just seemed a perfect emblem of the time, and to see later that it was made in 1977 made it seem prescient." Turner selected the film as part of the Vancouver Art Gallery's WE: Vancouver - 12 Manifestos for the City series; the Cinematheque screening is an offshoot of that, following in what is shaping up to be a tradition of very interesting film presentations by Turner, including one on two Vancouver-shot Robert Altman films (That Cold Day in the Park and McCabe & Mrs. Miller) and another on the James Clavell Japanese internment film, The Sweet and the Bitter.

If the fact that it's one of the only thrillers shot in BC in the 1970's isn't enough to make Skip Tracer seem a unique must-see, there's also the fact that debt is a central theme. It's an an issue of considerable timeliness that is seldom explored in cinema; the only other Vancouver example I can recall would be the young woman played by Nancy Sivak in Bruce Sweeney's Dirty, who is in default on her student loan payments. "Vancouver is a speculator's city," Turner offers. "It has always been about what's going to happen, from placer gold mining to resource extraction, the Vancouver Stock Exchange, and ultimately now real estate, for the last few years. It's about making money based on something that's going to happen. And the commodity in this film, of course, is somewhat the opposite: it's about what has happened, and what has happened is that a purchase has been made, and that purchase is not fulfilled, because there's money owing, and suddenly that commodity becomes the embodiment of debt. And so rather than what is going to happen, it's what has happened, and has not happened, at the same time; this person is out to collect on this debt, and that to me is a nice figure/ground way of speaking to the moment that became the '80's" - worth discussing in light of Oliver Stone's Wall Street, which Turner "thought was in some ways the ultimate mainstream film about our time, in the '80's... But again - that's stocks and futures, and this is past and debt," Turner continues. "We are in a debt culture now, and may remain always in debt, as we may remain always at war. The things that are besetting us - there's something to be gained by them; a world of fear is best brought about through ongoing wars and what-have-you, and debt, I think, is just another way to keep people scared. When they're scared, they're compliant."

A final reason to check out Skip Tracer on Thursday - it's not available, at present, as a region 1 DVD or Blu-Ray, and neither Turner or the Cinematheque's Steve Chow are aware whether the film is coming out in those formats. "It was hard to get on DVD," Turner notes. "I ended up getting a PAL version to transfer onto NTSC," which itself was a point of interest. "The reception of the film in England is quite unique. Certain film scholars see it as an important Canadian film, in a way that a lot of people go - 'I don't know this film, but I know Bruce Sweeney, or Bruce McDonald, or Lynne Stopkewich, or Atom Egoyan.' It's not part of our canon, but it actually is a perfectly intelligent film that deserves to be, and for some reason is not. I don't know why that is - clearly Zale Dalen did not remain a player in the film industry, to the point that this film would have been elevated as he rose within it." (Dalen's only other film that anyone I know of has seen is Terminal City Ricochet, recently released on DVD by Alternative Tentacles - read more about that here).

From the Cinematheque page on Skip Tracer:

Also on the program: On Location 1: Elvy Del Bianco's Annotated Film Collection (11 mins.) and On Location 2: Four Double Bills (22 mins.), two moving-image works created by Michael Turner for the WE: Vancouver exhibition. In the first, the titles of 167 Vancouver-shot films run on a credit roll with local arts researcher Elvy Del Bianco’s one-line “pitch” descriptions below each. In the second, eight well-known Vancouver-made films are edited to remove everything from them but their Vancouver locales.

Hope y'all enjoy the night - I won't be able to attend, having duties in Maple Ridge, but I'm sure glad I got to see the film as a screener. Really, really interesting stuff. 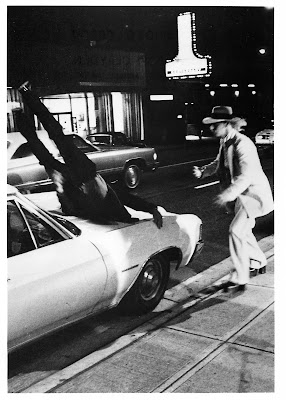 Posted by Allan MacInnis at 8:40 AM

say hello to Michael for me - John Armstrong

I was at the screening last night and it was really rewarding. I’ve added a review to Skip Tracer on IMDB. In the review, I include lead David Petersen’s interesting response when asked, post-screening, if he could speculate a bit about the character of John Collins, the film’s protagonist.

Thanks! I read your writeup on IMDB and liked it.