Dogtooth at the Vancity Theatre 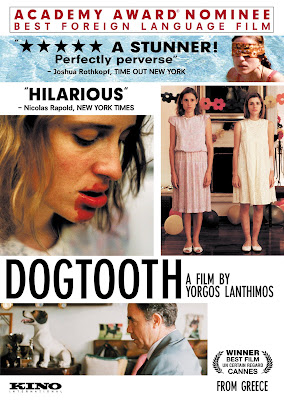 An Oscar-nominated foreign film and "Un Certain Regard" recipient at the Cannes Film Festival, Dogtooth, directed by Greek filmmaker Giorgos Lanthimos, opens Monday at the Vancity Theatre for a brief run; it definitely makes for an interesting viewing experience. Comparisons made to Michael Haneke are apt; it has some of Haneke's cruelty and detachment, but it is also considerably more surreal than the Haneke's I've seen. For reasons unexplained, a mother and father systematically misinform their three adult children - those who remain at home, that is; we gather one brother has escaped - about the world outside, creating a mysterious and malignant realm that only the father is safe to venture into. (There isn't much similarity to M. Night Shyamalan's The Village here, by the way, despite some similar devices). The children stay behind the protective walls that surround their garden, living in accord with the world as described by their parents: they play odd medical games, compete in apparently meaningless tasks (like being the first to wake up from self-adminstered anaesthesia) in order to win stickers, and hope that any planes that pass overhead (the nature of which they are obviously very confused about) will drop from the sky. They also engage - mostly the brother - in estranged, passionless sexual relations, which they have doubtlessly also been greatly misinformed about (these involve an outsider at first but grow progressively more incestuous). On reading the Vancity Theatre's description of the film, I had to assume it was some sort of parable about the social control - the ways that authority and the media conspire in society (with the help of the family unit, though here the family IS authority and the media) to keep the population ignorant, obedient, and engaged in socially-approved, but not particularly meaningful, actions, keeping people blinded to their true natures and safeguarding the hierarchy from any threat from below. That reading might work, actually, but the film doesn't leap out to suggest it, and I'm sure equally possible alternate readings could be arrived at; no decoder rings are provided. The critic who described it as "hilarious," quoted on the poster, must have eyes, thoughts, and emotions very different from mine; I wonder what he thinks when he sees planes fly overhead? 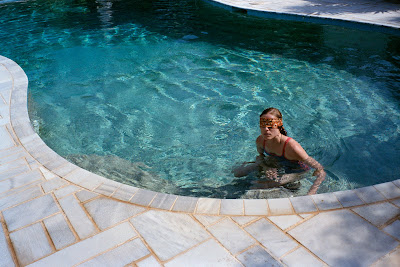 Hopefully on Monday - if the world doesn't end before then - I'll also have something up on Michael Turner's screening of Zale Dalen's Vancouver-shot 1977 film Skip Tracer, one day only (the 24th) at the Pacific Cinematheque. I remember sitting with Robert "Little Hamm" Dayton and Adrian Mack at a coffee shop on the Drive, where, I believe, Dayton said that he preferred the film to Dalen's later opus, Terminal City Ricochet; I had never seen it, still haven't, and am most excited to have the chance. More on that film here.
Posted by Allan MacInnis at 2:22 PM