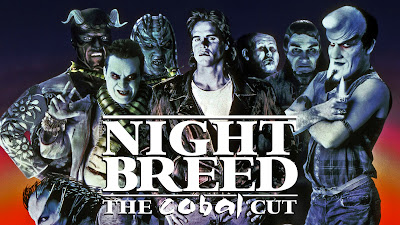 One of the great misses of horror cinema is Clive Barker's Nightbreed. The film, like the novel Cabal on which it's based, has one of Clive Barker's most idea-rich, archetypally dense storylines; it also boasts some very creative creature effects and a just terrific performance from David Cronenberg, as a murderous psychiatrist. He's perfectly cast, and, I'm told, had some input in writing certain scenes, which makes the film relevant to Cronenberg's own body of work; there's stuff about the mind being made flesh (in the act of murder, it happens) that will be familiar to anyone with a passing knowledge of Cronenberg's themes. That's not the only reason I'm fond of the film, though: Nightbreed is a profoundly punk film, in its attitudes towards authority and monstrosity, and touches on homophobia, racism, and the position of the Other in society. No other film has made the monsters the good guys in quite so interesting or rewarding a way; it's on the level of meaning that the film is at its most interesting. Sadly, these meanings are obscured by an hour long action scene that passes for an ending and various clunky edits that leave you feeling like vast swaths of dialogue are missing from the film; while it wants to leave you cheering (for the monsters!), Nightbreed leaves you weeping, for having so much potential for greatness, and falling so far short.

Imagine my excitement and surprise to discover that a) the film never really was structured according to Clive Barker's wishes, and that the finished product reflected ample meddling to make it more "commercial"; b) that a restoration has taken place, with Barker's participation, drawing from the best sources available to people without access to the negative, and has screened in many cities already; c) that this restoration is substantially LONGER, truer to Barker's original novel, Cabal, and has won the approval of many fans; and d) there is a petition you can sign to urge Morgan Creek to allow the restorers access to the original elements so there can be a full, proper revisitation of the film, for Blu-Ray and DVD purposes. See the Occupy Midian website for more, and please, folks - SIGN THAT PETITION! I haven't seen "The Cabal Cut" of Nightbreed, but I know this - it can only be an improvement on the theatrical version!
Posted by Allan MacInnis at 4:29 PM