Jeremy Schmidt's score for Beyond the Black Rainbow - recorded under the name of his solo synth project Sinoia Caves - is both stunningly effective and varied, ranging from unobtrustive proto-New-Age tinglings to menacingly propulsive Tangerine Dream-meets-John Carpenter electronica; it's one of the great electronic soundtracks I've heard, and makes me want to experience the whole movie at least once through headphones with my eyes closed - it's that rich. Schmidt's music interacts in fascinating ways with the sound design by Eric Paul, greatly enriches the images, and, notably, doesn't sound ever like Black Mountain, the rather shaggy Vancouver rock band that Jeremy plays keyboards in. Black Mountain draw on some of the finest moments of Neil Young, Pink Floyd, and Black Sabbath to make stoner rock of the highest order, with Schmidt on keys - check "Wucan" on Youtube for an especially cool example - but with the release of Beyond the Black Rainbow, and the cultish film geek buzz around the film, it may be that for cinephiles, Sinoia Caves will take precedence: because surely there are people who are enthusing online about the score who have no clue who Stephen McBean is. An unexpected development for those of us used to thinking of Sinoia Caves as a side-project!

With Beyond the Black Rainbow opening in Vancouver Friday at the Vancity Theatre, Jeremy Schmidt was kind enough to answer some email questions, thoughtfully dodging around a momentary confusion on my part (I didn't realize initially that the film had a separate sound designer - the sound design for the film is deep and musical enough, in an ambient noise kind of way, that I presumed that it might have been Jeremy's work, as well!). Thanks to Femke van Delft for having taken some very cool photos, previously unseen, of Jeremy over the years, unveiled, as far as I know, for the first time here... 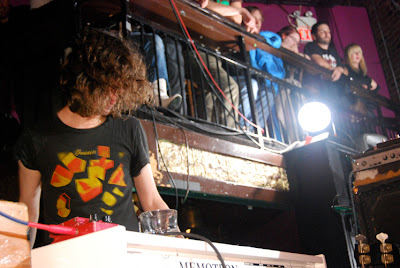 Allan: I have tons of questions about the process of scoring the film! How did Panos contact you? Did you see the film with a temp soundtrack, before scoring it? (What did they use?).  Were there suggestions from Panos as to the sounds he wanted? Did you provide him cues, which he then fit to the film, or - I suspect the latter - did you work closely, looking at images, and fitting music to them?  How hard a taskmaster was Panos? If you could walk me through your early involvement with the project...

Jeremy: I came on board after most of the filming was done and they were on to the editing phase. Panos was using one or two cuts from a previous album of mine among other things as 'temp.' tracks. While some of the music cues were just blank, I remember one longer sequence had some really amazing avant-garde kind of minimal choral music, and I wasn't quite sure how to make something as effective in its place...! Panos and I got along well because we're both kind of bloody minded with regards to how we set about making things and I think that we both appreciated how our very specific aesthetics could mesh well on this project. I think we established a rapport early on, based on a mutual appreciation for some of the key touchstones and reference points within the film. In terms of the production of the score, I was pretty much left to my own devices, but I think because the kind of music I'd already done in the past was inherently analogous to the vibe Panos was going for with the film, it allowed things to take shape pretty naturally. I remember at the end of our first meeting at the editing suite Panos said to me, almost as an afterthought, that the movie takes place in 1983, and I said well that's good, because a lot of the music I tend to make is often set around then also. This was kind of indicative of our ensuing collaboration.

Allan: What gear did you use? I’m under the impression that you’re an old-school analog synth man, but I’m curious if any digital manipulation of sounds occurred, as well…

Jeremy: Mostly Prophet 5, a couple of old Oberheims, Moog Taurus bass pedals, Korg CX-3 organ, and Mellotron... those have been my principal go-to axes for several years now... much of which also gets the requisite Space Echo tape delay treatment. Everything was done in a fairly archaic, lo-tech fashion by today's standards - actually, probably even by the standards of about 25 years ago..!

Allan: I know Joshua Stevenson and you have collaborated in the analog synth project BCVCO - I saw you play with them at the Western Front - and I see he was involved in the film, as well, as a mixer. How closely did you work together? I’m not entirely clear on the relationship between the soundtrack composer and the music mixer, when it comes to scoring a film - can you elaborate on it? Were other people involved (Panos? the editor?).

Jeremy:Josh has been a musical ally and collaborator with me over the years, and I felt pretty comfortable cinching up the mixes with him, and he also knows a lot about what I'm after. Mixing was kind of just to finesse things a bit sonically with some EQ, compression, et cetera, and also to put things into subgroups - for example, all the bass register in one stereo channel, an arpeggiating synth pulse on another, a melody line on another and so on, so that the sound editor could take elements in and out of the mix to fit with the picture edit, but not so much so that the music could be disassembled to a point where I wouldn't be happy with it. 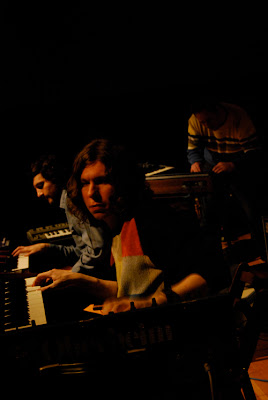 Jeremy Schmidt with BCVCO at the Western Front, photo by Femke van Delft, not to be reused without permission

Allan: Do you have your own favourite film soundtracks that inspired or guided you, either in scoring this film, or in thinking about how sound and images interact? Tangerine Dream's Sorcerer, maybe? John Carpenter? Did Panos ever say things like, “Okay, I want this bit to sound like Vangelis’ Blade Runner score, and then this…”

Jeremy: Vangelis' Blade Runner soundtrack is amazing, and yeah, I love Tangerine Dream. Sorcerer is great. Risky Business seems to be an ever-regenerative source of influence for me also...! And of course I absolutely love John Carpenter. I wanted to incorporate that kind of classic synthesizer 'pulse' as a definitive motif within the film, but for certain cues, I wanted to take things into a more atonal, drifting realm, and I suppose some of that was influenced a bit by experimental/modern stuff like Ligeti, or Penderecki's pieces used on The Shining soundtrack for example. Also some Sunn 0))) and Popul Vuh whom I also love... the list kind of goes on exponentially, so I'll just leave it there!

Allan: During the credits - the “trip into the eyeball” - it sounds like voices are being used. Are these manipulated samples or entirely synthesized? I assume no actual singers were used...

Jeremy: Originally that sequence was set to a live version of Pink Floyd's "Set The Controls For The Heart Of The Sun" so I wanted to do something similarly mantra and/or chant-like, but still maintain that static synthesizer pulse that appears throughout the film. All those "voice" parts were done using a Mellotron. It's the "boys choir" sound, and I was changing the speed of the tape on different parts to adjust the timbres, if that makes any sense. I like how mechanical, yet fluid the characteristics of the Mellotron can be - definitely one of my favourite musical instruments of all time.

Allan: Are there any subliminal things included in the soundtrack - the use of low or high frequencies, for instance, that aren’t so much heard as felt? Any "tricks" that might not be immediately apparent to the naked ear, or that might only be noticeable (for instance) to someone in an altered state of consciousness?

Jeremy: There is the occasional underlying sub-bass register that scrapes against the walls of an unknowable abyss, but you can't always hear the full range of it, and it often just manifests itself in the benign form of 'speaker rattle.'

Allan: Yeah, I noticed that at home (but not at the theatre!). ...so do you describe your music as psychedelic? Any thoughts on Beyond the Black Rainbow as an immersive, mind-altering “trip” film?

Jeremy: Psychedelia in one form or another seems to have always been at the center of my musical orbit, so to speak.. and I definitely see this film as having a very lysergic flow to it. It's long on atmosphere, with a kind of visceral photographic quality that I think is best "immersed" in, one way or another. The film does, at the same time, show us a very dark, brown-acid-flip-side to much of the ideology of the so called 'new age of enlightenment'.. as well as the Reagan-era landscape that lay in its wake, and it's not entirely humourless in doing so I might add also...

Allan: I would love to OWN a recording of the soundtrack for this film; are there plans to release one? (On vinyl, say?). Just a note - I don't really need the Venom song on it. I do listen to Venom now and then, but... I'd just as soon keep the experiences separate.

Jeremy: I'm working on putting together and releasing a soundtrack album on vinyl.. It may have a nasty bite to it, but no venom.. 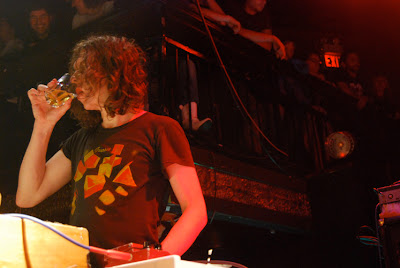 Jeremy: We're trying to put something together for late August here in the city, as well as doing a west coast tour around then also.

Allan: ...and why the name Sinoia Caves? They’re in Africa, right? What about those caves made you want to name your project after them?

Jeremy: My grandparents in the UK had an old photograph in their house of the Sinoia Caves (it's in Zimbabwe) which I was always enamoured with as a kid, it always seemed kind of nebulous and mysterious to me, and I've always been somewhat obsessed with the kind of impenetrable surface world of old photographs.

Allan: Is Sinoia Caves officially just you? The soundtrack is credited to Sinoia Caves, but could equally be credited to Jeremy Schmidt, right? (Any reason you chose to give credit to your project name, instead of your own name?)

Jeremy: It is just me. I figured the music I was making for the film was synonymous with what I usually record as Sinoia Caves, so I just named it as such.. and y'know always looking at the bottom line, right..? shifting units..! 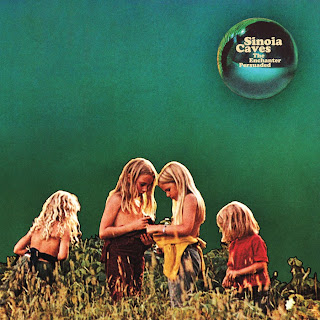 God I want that BTBR soundtrack so badly. Any idea if that is still happening? Schmidt's stuff is incredible.

I have no idea! I've fired him a question, we'll see.

Any update on the BTBR soundtrack? Did you get an answer from him?

Nope! Sorry. Dunno what's what, but I can't make it happen any faster...!