Chris Walter exclusive interview re: SNFU: What No One Else Wanted to Say 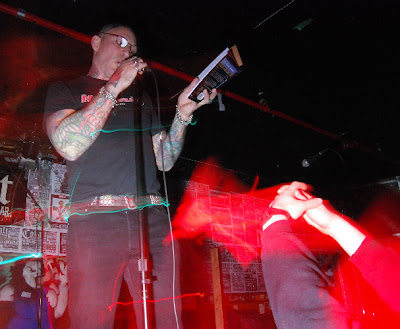 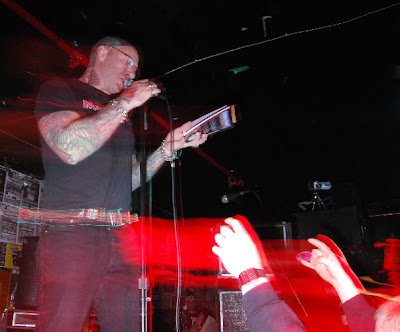 Chris Walter reads at The Cobalt, photos by Femke van Delft; not to be reused without permission


I did a kind of massive interview with Chris Walter for Big Takeover already, but he's willing to make time to give me some exclusive content for my blog... so here it is, another Chris Walter interview, about his newest and best band bio, SNFU: What No One Else Wanted to Say. Visit his website here for more information, and catch the present incarnation of SNFU at Funky Winkerbeans on Saturday the 21st, for Chris' booklaunch; he'll be on hand to sell books, priced at $15 (and the big guy is always more than happy to sign them; make no mistake, as imposing as a figure as he cuts, Chris is a pretty friendly, approachable dude).

Q: What do you love most about the music of SNFU?

A: I loved the whole package: the power, the riffs, the vocals, and the energy they put into live shows. SNFU blew me away when I first saw them at the Doghouse in Winnipeg in ’83, and I wasn’t surprised that they became as popular as they did. I was particularly shocked to see Jimmy Schmitz playing bass with them and jumping around all over the place. He’d been in a band with me just a year earlier, and he certainly wasn’t that good then. Jimmy learned because SNFU practiced like maniacs every day, and Pissed & Broke obviously did not. Still, I was dumbfounded by SNFU and it seemed somewhat surreal that they were from Edmonton. I mean, there were some good punk bands from Edmonton and Calgary, but SNFU were really good.

Q: How do you feel about your new band bio?

I’m sure the book has its flaws, but it must better than my two previous biographies just for the amount of work I put into it. The learning curve is steep with the music bios, and I still have much to learn before I’m truly satisfied. With this one, I realized it was important to interview the roadies, merch guys, and even fans because they remember things the bandmembers tend to forget. For touring musicians, the stories all blend together after a while and become one long, noisy blur. Writing music biographies is much different from writing fiction, and I’m basically just faking it as I go along. 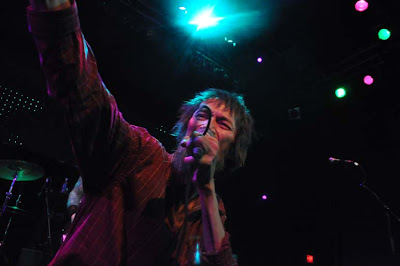 Mr. Chi Pig at Rock'n'Relief, photo by Femke van Delft, not to be reused without permission.

Q: Has Ty Stranglehold (who had plans to write an SNFU band bio himself) ordered a copy yet? (Has he said anything about being scooped?).

Ty hasn’t ordered a copy yet, and he will probably never be the president of the Chris Walter Fan Club, but I gave him two years to get it done, and he’d been talking about it for years before that. Finally, when I learned that Ty still hadn’t interviewed many of the key players, I decided to move forward with my project. In many ways, I was meant to write this book because I personally know many of the people in the story, and I’ve known Ken Chinn for more than thirty years. If Ty ever does get his book finished, I will surely buy a copy.

Q: I remember you actually having to explain to someone at the Cobalt (RIP) that he couldn't buy you a beer, because you don't drink anymore (you'd figure your fans would know this by now...). In lieu of offering you alcohol, then, what should fans of yours do to show appreciation at the book launch? (Besides the obvious "buy my books!"). Is there anything they shouldn't do?

A: Don’t put your drinks on the table with my books because they always spill and wreck my covers. I recently bought book stands so the books won’t be lying flat, but I still hate it when people put drinks on my table. At a launch in Winnipeg once, the legs of the table buckled on two separate occasions when kids in the pit banged into it. Somehow, I managed to sell most of those books, even though they were covered in blood and beer and scratched with broken glass. You can buy me drinks if you want, but I’ll just give them away to broke-ass punk rockers. It still feels weird to do that, but for me, booze opens a door I intend to leave closed.

Q: Anything we haven't covered somewhere already that you want to say?

A: Fuck, probably, but I’m burned out from doing so many interviews and can’t think of anything else. Generally, I don’t put as much work into publicity, but I’m touring with this book and need all the press I can get. I worked for an entire year to get to this point, but now I just wish all the promo and touring was done so I can start for real on the next book. Sometimes I feel like a shark, unable to stop moving lest I drown. 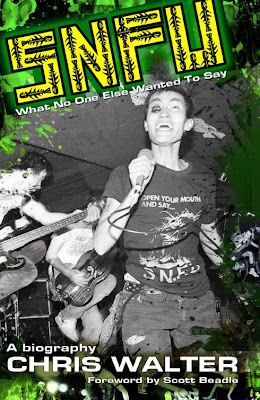 ...End interview, this is Allan here. Just a brief testimonial: I read a proof of SNFU: What No One Else Wanted to Say and really enjoyed it. Chris Walter has a gift for getting down to the nuts-and-bolts reality of being in a band; the illusions, lies and hype that surround the music industry disappear completely and he offers a compelling, down-to-earth, non-romanticized story of the rise, fall, and ongoing afterlife of one of the best bands in Canadian punk. It's his thickest bio yet - maybe his thickest book? - but it's about as easy to read as potato chips are easy to eat. Since Goony lives in Japan now, this may be one of the last chances Vancouverites have to see SNFU perform. Come to the show, buy a book, and don't put your drinks on Chris' table, already!