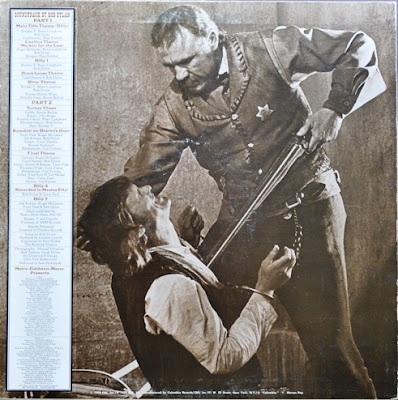 Who even knew that, at least up until last Friday, R. G. Armstrong was still alive? Since he appeared to be a grouchy fifty year old in films made in 1975, I wouldn't have guessed it. R. G. was one of those character actors who elevated any film he appeared in, with a face full of character, total conviction in his voice, and the capacity to dominate pretty much any scene; perhaps his greatest moment in film is holding the shotgun on Billy (Kris Kristofferson) in Sam Peckinpah's Pat Garrett and Billy the Kid, as immortalized on the back of Bob Dylan's soundtrack album above, but he even brings class to dreck like The Car, where he plays a mean-tempered white trash wife-beater with such style that you end up liking the guy. As noted before, once someone makes it past 90, it seems more appropriate to replace mourning with a "holy shit, man, you had a good long life"-kinda attitude; but my respects to those who knew him.
Posted by Allan MacInnis at 10:23 AM