The Meatmen in the Straight, plus Tesco Vee on ABBA 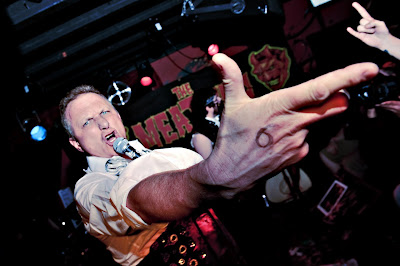 Tesco Vee by Ryan Holloway, not to be reused without permission

Did a two-fer on the upcoming Meatmen show August 9th at Fortune Sound Club. The main article is here, but there wasn't room to mention the massive Touch and Go 'zine anthology; the presence of Vancouver bands in the book and a 1981 scene report from one Margrette A. made it suitable for a Music Note, which is here. Thanks to Mack and Mike for helping make that happen!

Among other things that I couldn't squeeze into my wordcount was the question of Tesco's ABBA enthusiasm. It was one of the first questions I asked him:

AM: Is your interest in ABBA sincere or ironic?

TV: It’s absolutely sincere. I’m not one of these bandwagon-jumpers, I’ve been listening to them since I first heard the lilting strains of “SOS” and “Waterloo” back in ’74. That wasn’t exactly in my wheelhouse - ’74 was more about Thin Lizzy and Grand Funk and Montrose, but I was immediately taken, I was, like, “what is this, it’s different than anything I’ve ever heard. It’s pure pop majesty,” and I was hooked from day one.

AM: That’s quite beautiful, knowing that about you. And it also kinda undermines some aspects of you.

TV: Yeah, exactly. It’s like - yeah, I know what you’re saying. People are like, “you’re not serious,” but yeah - I’m absolutely serious.

AM: They have really sweet melodies and harmonies.

TV: Absolutely they do.

AM: And they seem very sincere.


TV: And they sincerely made a whole lot of money, too!

AM: Did you ever get to interact with ABBA?

TV: No, not at all, nothing, but they’re in my heart, and they’re in my record collection, and I’ve got a whole lot of ABBA stuff. I’ve got a big standee in my office, from, like, ’76 I think it is, and all sorts of collectables. Someone in New Orleans actually found a pair of ABBA clogs in a trashcan in, like, 1994, and I traded them, like, six t-shirts for it. They’re proudly displayed, and any of the girls that come over, they gotta try them on: “oh my God, ABBA clogs.” And ABBA dolls - Matchbox put out ABBA dolls, and I got’em all.

So you heard it here, folks... bring your rare ABBA merchandise (preferably still in the box: Tesco is a serious toy collector) to the Fortune Sound Club on August 9th for the first-ever Vancouver appearance of the mighty Meatmen!
Posted by Allan MacInnis at 8:29 AM