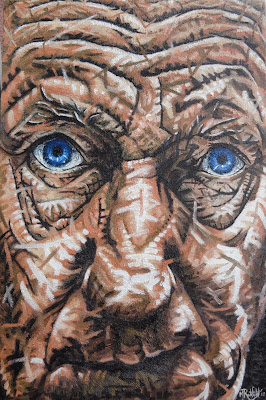 One of the my longest-standing friendships is with painter Mark Richfield. Not all his paintings astonish me, or even him - I've seen him whiting out some of his own canvases that he wasn't happy with - but when his muse is fully firing, he can produce some truly remarkable images, such as this portrait of William S. Burroughs, his most recently completed work. The JPEG really doesn't do it justice; I've had the privilege of being stared at for several hours by it, and it's one intense, potent image, Burroughs staring into you and judging you, challenging you to meet his eyes, which just keep sucking you back in... I love that Mark was completely unconcerned when I asked him, on seeing an early version of it, if Burroughs' eyes were actually blue; indeed, what do such things matter, where art is concerned?
Posted by Allan MacInnis at 10:36 PM