Red Herring: a fantastic, intimate show that YOU probably missed! 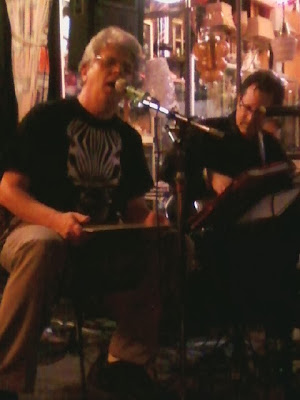 At one point towards the end of the second Red Herring set at the Prophouse last night, frontman Enrico Renz quipped something to the audience - a packed crowd of maybe 30 people, among them local musicians Ford Pier, Elizabeth Fischer, and Judith Scott - to the effect of, "if you think you're surprised... so are we!" That came after an amazingly tight, fun, high-energy rendition of their song "Love Machine," but well before the band knocked it out of the house with the three song closer - "Taste Tests," "Neon," and "Rocketship," the latter two unknown to me. (A final poem about Trout Lake park by Renz didn't really command the attention of the last few songs; ending on a bang would probably have been wiser, though Renz is an engaging poet - he'd done a previous piece earlier in the night that began with a fish in an aquarium becoming self-aware, which had him imitating gills and fish-facedness as he performed). The first half of the night, despite very recognizable versions of "Maturity" (which opened the show, Renz reading the lyrics from the back of the band's sole EP) and "If You Work For Me," had been dominated by more recent compositions from Renz, as well as new songs by bassist Martin Walton and guitarist Stephen Nikleva, both of whom took the mike to sing. The  newer tunes sprawled across the musical map, taking in Louisiana swamp blues, country music, and even Macedonian polka - which makes more sense when you understand that Nikleva jams every Thursday at the Chai Lounge (East Is East) on Main Street with Roma violinist Lache Cercel, exploring his own partially Eastern European heritage. But the final few songs of the night were very much a return to vintage Red Herring - a spiky, jangly, danceable art-punk that bears some similarity to early Talking Heads, but is mostly quirky and iconoclastic and unique. It was clear that the band didn't expect to return so effortlessly to their original sound - Nikleva had told me on the phone previously that he expected the songs wouldn't sound much the same - but if anything, they sounded better than on record, for the energetic live delivery: they were liberated, exploratory, highly playful - but mostly smokin' hot. There is life in Red Herring yet, it turns out. If Vancouver is lucky, they will do this again very soon...
Posted by Allan MacInnis at 1:01 PM