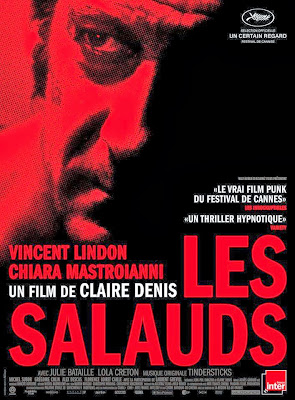 Spoke to Claire Denis the other week, apropos of the Vancity Theatre's upcoming screening of her new film, a revenge-driven noir called Bastards.  She's an intimidating filmmaker to find oneself on the phone with; I haven't seen all her films, and of the ones I have seen, was utterly stumped by at least one of them (2004's The Intruder, which I caught at the VIFF; it's beautiful to look at, but I have no clue what was going on in the last act! While I'm confessing, I didn't much know what to make of the ending of White Material, either - was totally startled by it, though I thought I had understood the film up to that point...). Even her work with others is the very essence of intimidating: for instance, she's worked on films as esteemed (and varied) as Makavejev's Sweet Movie, Wim Wenders' Paris, Texas and Wings of Desire, and Jim Jarmusch's Down By Law. She also worked with Jacques Rivette, one of various cinema legends whose work I am woefully under-educated on, and even appears briefly in Bresson's Four Nights of a Dreamer (not that I could pick her out)...

Still, unworthy though I may be, who could pass up the chance to speak to Claire Denis? I enjoyed Bastards, wanted to give it press, and I am utterly in love with Trouble Every Day, Denis' somewhat neglected "sexual cannibalism" horror film with Vincent Gallo and Beatrice Dalle. It's a dark horse pick: while people like Charles Mudede hold Beau Travail as her best film, I've seen Trouble Every Day five or six times now, find it bottomless and beautiful and haunting and provocative. Apparently the look of the film was informed by the photography of Vancouver's own Jeff Wall!

Anyhow, it wasn't the best interview I've done, but the Straight article (the first link above) hangs together okay. (I also talked briefly to Destin Cretton, whose film Short Term 12 is paired with Denis'; it's a much easier film to take in, though it has its share of emotional intensity...). The fact of the matter is that Bastards actually has a pretty simple story, that people are making too much of its "opacity," or whatnot. Read the Vancity Theatre's description of the plot before you watch it, so you're oriented, if you're at all concerned... I think my favourite moments in the film are actually the opening ones, not of a girl walking naked, as the Vancity description has it, but of a rainy night, and a haunted man looking out at it. By the time you learn who he is and the significance of the shot, you won't remember the image, which is why I think Denis' films actually need to be seen more than once to be appreciated... but, well, she disagrees, so...
Posted by Allan MacInnis at 1:48 AM