A supposedly terrible movie that I really want to see

An Australian friend wrote me a few days ago to express her extreme frustration with The Counsellor - a collaboration between Ridley Scott and esteemed author Cormac McCarthy - and I told her that it hadn't opened here yet. 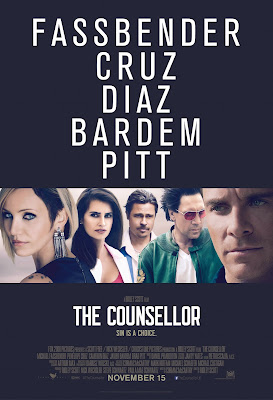 Oops! Turns out it's been playing at various locations around Vancouver for a few weeks now. Apparently I've been ignoring the multiplex at my peril - but you know, I haven't been much impressed with a single mainstream film this past year? Unless you count All Is Lost, which I took in at the VIFF,  and liked, or Only God Forgives, which seemed more of an indy-arthouse venture (and which played the Rio, which isn't exactly a "mainstream" mainstream movie house), it's been kind of a duff year for Hollywood cinema. Multiplex-wise, probably the most visually accomplished, immersive experience I took in was Gravity, and even that felt like superbly crafted spectacle in the service of next to nothing - a ho-hum bromide about not giving up (and/ or the existence of God or the divine or so forth). What else did I see this year? After Earth? Elysium? The Great Gatsby? World War Z? Pacific Rim? All of these were pretty to look at, entertaining enough to watch in the moment, but negligible in the long run; none are films - I don't think - that I would bother watching again (though Elysium had enough meat on its bones to get a positive review out of me, somewhere back there). Ender's Game made for an interesting writing assignment, but it turns out the controversy over the film was much, much more interesting than the film itself; You're Next was fun, but not as interesting as the previous Adam Wingard films I'd seen - his part of V/H/S/ and A Horrible Way To Die, which actually does something new with the idea of the serial killer film. I actually don't like horror movies where I can see the twist coming from the halfway point - which is very much the case with You're Next.

Anyhow, with 2013 having offered so many less-than-impressive (and expensive!) mainstream movie experiences, since the VIFF ended, I've had my attention fixed on the Cinematheque and the Vancity Theatre, and haven't really paid attention to what's opened elsewhere. Cinema seems something that there's no longer room for in your average mainstream movie theatre - not that there was ever much; the movies that get distributed now have more in common with roller coaster rides than the sort of movies I care about. (I was reading that John Sayles had to resort to a Kickstarter campaign to finance his new film, Go For Sisters; while admittedly it's been awhile - 1999, to be exact - since I wholly loved a Sayles movie, that's just fuckin' WRONG, man...).

So call me perverse if you will, but, despite all that, suddenly I am very excited to see a film that ALMOST everyone is saying is terrible: Ridley Scott's adaptation of an original Cormac McCarthy screenplay, The Counsellor. With a 36 percent approval rating on Rotten Tomatoes and a savage, highly entertaining Salon review to its credit, the film sounds like it could be a misguided wreck on the scale of Tough Guys Don't Dance. There are dissenting views - but even the author of that article concedes he might just be striking a contrary pose (something I myself am not immune to). Certainly none of my cinema buff buddies (save my Australian friend) have said a word to me about it...

Except here's the thing: I haven't actually had much use for anything Ridley Scott has done since 1982. I remain of the opinion that his now deceased brother was the vastly more interesting filmmaker. Some of Ridley Scott's films (Gladiator) are painfully bloated, boring, and nearly impossible to watch; others (Black Rain, Prometheus) flat-out make me mad. I own exactly two of Ridley Scott's films on DVD: Blade Runner and Alien - and am not looking to acquire more, ever (though I would consider watching The Deullists again sometime, or maybe his Columbus movie). Pardon my heresy, here, but even Blade Runner I consider highly overrated, think the people who call it one of the greatest films ever made (as that Salon reviewer seems to say - hmm) need to see more real cinema. In a world where Prometheus - which I'm pretty sure is the single biggest insult to my intelligence I have ever seen on a theatre screen - gets mostly rave reviews (74% on R/T), maybe a film the mainstream critics are declaiming as awful is going to be truly great?

My Australian friend didn't think so, mind you. And I know from experience that Cormac McCarthy *can* get carried away with himself as a writer. Sometimes that's what's beautiful about his prose - as with his magnum opus, Blood Meridian - but it does probably mean something that the best film made from one of his works previously is No Country For Old Men - which is based on an atypically stripped-down and spare text, one which almost reads like a sketch for a feature film. Even The Road is uncharacteristically sparse, in terms of its language, which may have something to do with that film's semi-effective qualities. It *sounds* like The Counsellor allows McCarthy to totally indulge his propensity for elaborate language, like he has not been encouraged to restrain himself. That alone could make it interesting, though I may find myself closing my eyes and trying to imagine the dialogue on the printed page...

In any event, now that I'm aware of it, I'm actually keen to see this movie. Seems I very nearly have gotten to a place where if the critical consensus on a major film is that it's bad, it makes me more curious about it, not less....
Posted by Allan MacInnis at 2:48 AM