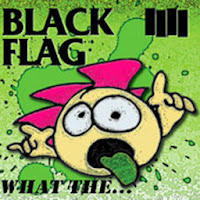 The whole world that cares has already weighed in on social media, but I'm avoiding cleaning the kitchen and thought I might as well register my thoughts on Ron Reyes' being ejected from Black Flag just a couple weeks before their new album is due out.

I didn't attend the recent Vancouver Black Flag concert, but I had very fond memories of seeing Ron Reyes belt out classic Black Flag songs at his 50th birthday gig at the Rickshaw in 2010, which event heralded his first performance with Greg Ginn in decades. I've seen Piggy a few times since then, and spoken to Ron for the Straight on a couple of occasions; my impression is that he's a sincere, conscientious man, and a genuinely nice guy, who happens to have some of the most fearsome punk rock vocal cords around. News of various lawsuits and other nastiness emanating from the Black Flag reunion has made me feel kinda bad for Reyes, made me wonder how he was weathering things. Not so well, it turns out.

Hearing now that he's been booted from Black Flag - and reading his statement online - makes me think he's probably better off. Still, there are rumours floating around that the new album, What The..., is going to be delayed and his vocals re-recorded by this Mike V. guy... It's just a rumour, but the fact that the official digital distribution of the album has suddenly stopped suggests that there might be something to it. It would be really, really wrong, of course, but then, Greg Ginn seems hell-bent on destroying any enthusiasm people might have for his band or their music. Replacing the one member of the band whom everyone has been unanimous in praising actually manages to one-up the douchiness of those lawsuits (which he lost, by the by). I'm not sure what more he could do, at this point, to make things worse for himself - rip up a photo of the Pope on national TV? License "My War" to be used in a Adidas commercial? ...Maybe he should sue himself for sabotaging his own fucking band....

Of course, whatever happens, the album, What The..., has been circulating on the net for weeks now, and won't ever go away - like the 1982 Black Flag My War demos, with Chuck Biscuits on drums, it's out there for anyone who cares to find. Sadly, it's only half-good (or three quarters, at best). It has some terrific driving energy - and some surprising funkiness - and both Ginn's guitar and Reyes' vocals are very cool, but the songs sound wayyy too samey for any to stand out or become classics. I mean, there's a song called "Shut Up" where the chorus is "Shut up! Shut up! Shut up!" Then a few songs later, there's a song called "Go Away" where the chorus is "Go away! Go away! Go away!" A surplus of ideas they clearly did not have. I mean, maybe it will grow on me, but even if it does, at this point, Greg Ginn has pretty much soured me on supporting anything Black Flag does ever again. Just as well that I already own as many SST albums as I care to...

My condolences to Ron Reyes, though. (I like the cover art - that's Ron's drawing, apparently!).
Posted by Allan MacInnis at 12:52 AM