This Friday: Facefest, featuring a cast of dozens! 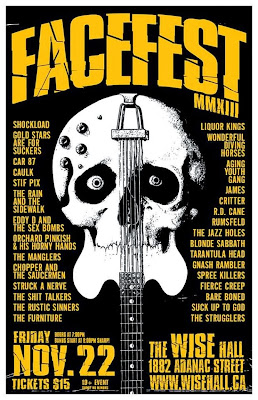 (Facefest update: just a few minutes ago, I posted the previous poster for Facefest on my blog - and thought, in passing, that it was weird that the Strugglers weren't playing; almost immediately thereafter, I saw Kristina Mameli's update on Facebook with a new Facefest poster, with the Strugglers on it after all. So all is right in the world - and I've updated the image. Not sure what other changes have been made to the lineup. My original post follows):

Had a happy chat with Aging Youth Gang's Sandy Beach at the Roky Erickson show, but I'm not sure what, if any, of what we said was for print; still, you can catch this excellent Vancouver punk band, partially made up of former Spores, at Facefest this weekend! Here's a live acoustic version of their great song, "Maggots," with Sandy on vocals, recorded at the former Cobalt... Facefest press release follows!


Facefest 2013: Celebrating 18 Years of Ruptured Eardrums
Vancouver, BC-November 22, 2013—Faceplant Productions, in concert the Wise Hall (1882 Adanac Street) and long-time sponsor R&B Brewing, present Facefest 18, an annual fundraiser showcasing an eclectic sampling of Vancouver’s musical talent. Featuring rapid-fire 15-minute sets from over 25 local luminaries, Facefest has become one of the most anticipated festivals of the year. Located in a residential area, the historic Wise Hall has been a cultural, artistic and social venue for over 50 years. Doors are at 7pm, show starts at 8; tickets are $15 at the door.
This year features over 25 acts including Aging Youth Gang, Car 87, Caulk, Chopper and the Saucermen, Eddy D and the Sex Bombs, Gold Stars are for Suckers, Orchard Pinkish and His Horny Hands, Shockload, Spree Killers, The Liquor Kings, The Manglers, The Shit Talkers and more. With bands from almost every conceivable genre, Facefest is perhaps the most diverse musical event of the year.
Since its inception in 1992, Faceplant has been providing rehearsal and recording space for musicians of all genres and talent from the heart of East Vancouver and is one of Vancouver’s longest-running and most unique spaces. Facefest is a celebration of community, as well as an annual opportunity to support, network and raise funds for maintenance of the space.
Facebook event: https://www.facebook.com/events/251308925020820/?fref=ts 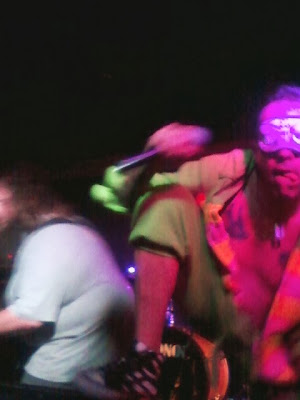 (The Strugglers at Funky's, awhile ago now...)
Posted by Allan MacInnis at 2:02 AM