No money means it's a good time to sign out DVDs from the library, and today I got quite a fistful. Finally going to commit to seeing Love Story with Ali McGraw and Ryan O'Neal, though I might set it aside to watch with my girl, who has been obliging me with witches and possessed nuns and Tarkovsky and angels who long to be human, and is probably overdue a chick flick... might as well at least be a historically important one, and hey, is that John Marley I see in the credits? Ooh. (I will basically watch any film if it has an actor from Camp Cassavetes in it, though John Marley, Seymour Cassel, Peter Falk, Ben Gazarra, and Val Avery get the choice places. Apologies to Gena Rowlands, there, but she's done a lot of Hollywoodsy stuff I'm not so keen on). 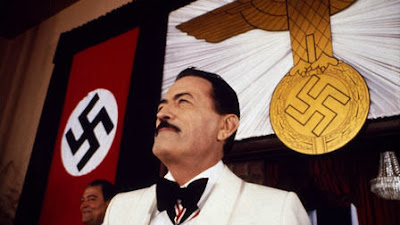 Meantime, it's movies with Ma here in my suburban purgatory. We started out tonight with The Boys From Brazil. Which, really, is the perfect DVD to get from a library: it's not quite good enough to be worth owning, but plentifully enjoyable as an idle entertainment, telling the improbable story of a Nazi hunter (Lawrence Olivier) hunting down Josef Mengele (Gregory Peck, in what surely must be his baddest bad-guy role) in an attempt to stop a plan to... well, it's a bit of a spoiler, I guess, but does anyone out there NOT know that the film involves a scheme to clone Hitler? Many times over, in fact. The cast has a couple of pleasing supporting roles from James Mason, Michael Gough, and an entirely unexpected Bruno Ganz, a couple of films after The American Friend, and one before Knife In The Head. 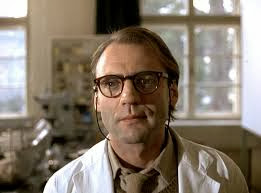 The real shocker, however, was that, when the credits rolled, I realized one character had been played by Sybil Fawlty herself, Prunella Scales! That's two Fawlty Towers tie-ins in a very short period of time; perhaps next I'll stumble into a film with Andrew Sachs in a role... I've been told I should show Mom Quartet... 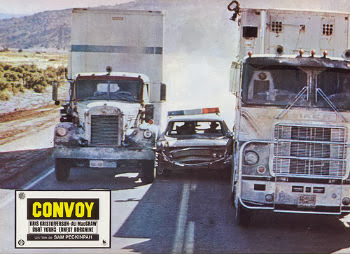 What really surprised me was the next film in our after-dinner movie-thon, however: Sam Peckinpah's penultimate film, from 1978, Convoy. Though I dimly recall seeing it once as a teen, I have avoided the film since, assuming it was the work of a filmmaker in terminal decline. It holds 38% on Rotten Tomatoes and has been described by a fellow blogger as an incoherent mess, the "nadir" of Peckinpah's career; I was more than prepared to believe the naysaying, since signs of self-indulgence, self-destruction, substance abuse, and general sloppiness set in with Peckinpah as early as 1973, starting with his sprawling, maddening rough cut of Pat Garrett and Billy the Kid (I hold it to be the only legitimate version of that film, since I have never forgiven the decision to remove the "what you want and what you get are two different things" line from the Peckinpets edit, but that doesn't mean that I find the rough cut watchable). I'm fond of that film, and of his subsequent three movies - Bring Me the Head of Alfredo Garcia, The Killer Elite, and Cross of Iron - but none are up to the level set by Peckinpah with the films he made previously (I hold The Getaway to be his masterpiece, at least in terms of sheer craft). And for him to turn his talents to a crowd-pleasing truck driving movie grouped with such crap as Smokey and the Bandit - how could it possibly have any merit?

Guess what? It's brilliant. Nevermind that much of the footage in the film was apparently shot second-unit by Peckinpah's friend James Coburn, while Peckinpah was indisposed with health, alcohol, and cocaine issues, holed up inside his trailer. Forget that it tells a juvenile story, written around a CB radio truck-drivin' song, or that it is filled with slo-mo car wrecks and barfights, scored with upbeat music for rednecks to hoot and cheer to... As childish as it may be, it's beautifully shot and edited, and very visibly in the end result a Peckinpah film, however much help he had in getting it made. In fact, I'm going to go out on a limb and say it's by far his most skillfully crafted, perfectly executed film since The Getaway, is in many ways a return to form, even if the subject matter is unworthy and the emotional tone one of terminal immaturity, sentimentality, and cantankerousness. The leads (Kris Kristofferson, Ernest Borgnine, Ali McGraw, Burt Young, and even Seymour Cassel!) are all just fine - with Borgnine and Kristofferson dominating - and the film *is* very much related to Peckinpah at his peak, with easily-spotted plot/ thematic resonances with The Wild Bunch (going back to rescue a jailed friend), Junior Bonner (the precarious modern survival of the cowboy spirit) and The Getaway (the romantic couple in flight from the law). More on the film here - including several glowing IMDB user reviews; Peckinpah fans who have snobbishly turned their back on this film (like myself) might be very pleasantly surprised by how thoroughly... Sam it is.(Borgnine is pretty great, too). And hey, you know, in its place, a good car wreck can make for entertaining cinema. What the heck... 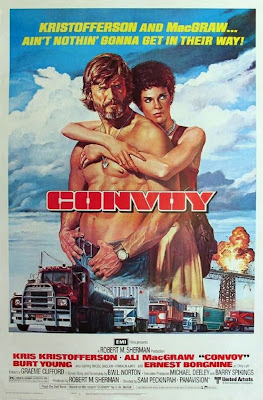