Roky Erickson in Vancouver: setlist, plus quick review of a show you probably were at anyhow 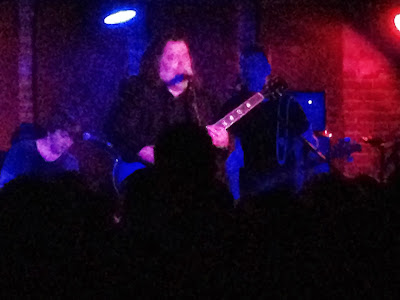 What a terrific night! Thanks to La-Ti-Da Records for bringing Roky Erickson to town - a bucket list concert if ever there was one. It was a lengthy, varied set, longer than most recent Roky shows on Setlist FM - feel free to correct me if I've missed anything:

Night of the Vampire - epic, dramatic intro to the night, with crowd whooping as Roky was led onstage (by his son?)
Cold Night For Alligators
Bermuda
White Faces
John Lawman (Roky appears to have altered the lyrics - it didn't SOUND like he was singing about killing people all day long - & the band got a bit out of synch on this one at the end!)
Goodbye Sweet Dreams
Roller Coaster (thanks to Adrian Mack for educating me on this one - his show review here)
Fire Engine
Tried To Hide
Levitation (my girl, bless her, checked to see if Roky was singing "I've got limitations" on this one... nope, that's not the lyric to that! Incidentally, for the longest time I used to make up my own lyric to "Two Headed Dog," back when I didn't know it too well: instead of the Kremlin line - which I either couldn't make out or didn't understand, or a bit of both - when singing the song to myself, I would improvise, "it doesn't work if you whistle with a two-headed dog." Trying to impose logic on the lyrics of Roky Erickson can only lead to failure).
Splash 1 ("home to stay")
Reverberation
Stand for the Fire Demon
The Wind and More (with what sounded like passages of extemporaneous lyrics from Roky, like he was just free-associating. I can't be sure, though. My favourite tune of the night!)
Bloody Hammer (people got moshing up front!)

Encore:
Two Headed Dog (briefly someone got up-ended in the pit and crowd surfed, which I was not expecting at a Roky Erickson concert!)
You're Gonna Miss Me (minus the electric jug, but if that was indeed Roky's son, he joined the band to provide a few background vocals along the jug-lines)
Roky's band provided able support throughout - singing some of the lyrics that Roky dropped and providing a deep, rich, sometimes eerie background texture, both vocal and musical; a couple of raised hand gestures aside, Roky himself stuck to playing and singing, with song intros and thank yous coming from either the guitarist or bassist, wasn't sure which... but he was in great voice (and even when his voice breaks - unlike, say, Ozzy Osbourne - he still sounds fantastic).
Openers Dead Ghosts teased the audience with a lick from the Cramps' "Primitive" as they were soundchecking, but then they didn't play the song, which prompted me to wonder throughout the night why bands don't play more covers nowadays; especially when you're crafting music that's consciously retro and genre-referencing, as Dead Ghosts do - they play a Nuggetsy psych-garage-pop - why not throw in a familiar tune by another artist now and then? (People with a fondness for the art of the cover should note that Tim Chan's band China Syndrome will be doing three sets of music, including MANY 80's covers, at the Ukrainian Hall as part of a school benefit this Saturday; I bet the upcoming Enigmas reunion January 11th will have a few covers, too).

Incidentally, Dead Ghosts prompted the best shout from the peanut gallery that I heard, again during the soundcheck; one of the members asked for reverb in his mike, and after a few minutes of soundchecking, someone seated behind me shouted, "More reverb, I can still understand you!"
The next band up, the Ballantynes, were easily the second best band of the night (I can't put them above Roky), playing a really tight, rich, guitar-driven Motown/ R&B, with two drummers, two guitars, three members who sang, a bassist and an organ. They're one of the best bands playin' this sort of music that I've seen since I caught Sharon Jones and the Dap-Kings; the tattooed, sexy main singer commented with total sincerity and joy when we ran into her by the ladies' room after the show that she had been on the edge of tears the whole night, so moved was she to have played before Roky Erickson... This is a great, great band!
Seattle's King Dude had an interesting guitar sound - Johnny Cash, Nick Cave, and the Gun Club came to mind, and there were all sorts of tense, dramatic musical passages that more than earned the band the description of "apocalyptic folk" - but they have a singer who does not seem to have found his voice yet - quite literally: he switched from a slightly whiny, under-differentiated "standard male vocal" to a deep, at times ironic-seeming growl to, at one point, what sounded weirdly like he had an Australian accent! Guy kinda needs to pick a voice and stick to it. (Plus the inclusion of a few moody slow acoustic numbers was probably inviting impatience from an audience ready to Rok). I suspect I would enjoy King Dude more if they were not the third opening act before a band I was really excited to see...
Posted by Allan MacInnis at 11:50 AM