The absence and presence of lightning 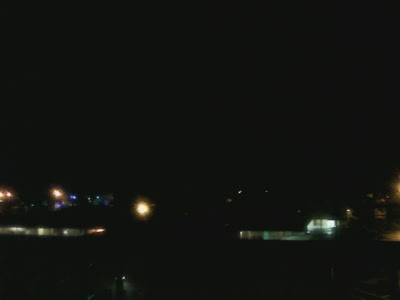 Photographing lightning is no easy thing to do. I have no idea how the pros do it. I tried once in Japan to capture one of the intense lightning storms there, using a humble point-and-shoot camera - I'm no photographer - and accomplished nothing more than shooting up a roll of film, walking around the streets of Ageo-shi in the dark; all you could see, when I got the pictures developed, was the night sky, the streetlights, and the odd drop of water on my lens.

Tonight, just before 4am, I was awakened from dreams I do not remember by sounds I did not recognize. I thought someone was dragging my outdoor armchair across my balcony - it was like the rumble of furniture being moved. Since I'm not on the ground floor, this seemed strange enough to cause me to get out of bed, somewhat startled, to see what was going on, but by the time I was staring out my balcony window, it was clear enough what I'd been hearing - a summer storm.

Most of the lightning registered as moving patches of light illuminating the clouds across the Fraser River. It was quite frequent, so I grabbed my cellphone. I stood on my balcony in my crocs (...so as not to step in the pigeon shit), underwear and Adstock t-shirt, cellphone sideways, pointing the lens at the horizon and clicking away, hoping that at some point I would just happen to be taking a photo when lightning struck. I stood for some fifteen minutes like that, trading up my angle now and then. At times it was like the lightning was teasing me - it would flash just before, or just after, my shutter clicked. (My cellphone makes a loud, cameralike sound when taking photos, that may, as some friends were speculating the other day, have nothing to do with the mechanics of the camera and everything to do with making "stealth photography" - upskirts on public transit and the like - impossible). Photo after photo and all I was doing was missing out on seeing the best strikes - including one massive west-to-east arcing, branching bolt - because I was looking at my cellphone camera at the time they happened. I tried shooting with the camera held to my forehead for awhile, so it didn't interfere with my seeing what was happening in the sky, but I fared no better. I shot a hundred or more images of nothing much at all, standing, then sitting there, because several times I had to pause to erase sets of 20 files each, to keep my camera in its high-res mode.

Finally I gave up and resolved to just watch the lightning. I think I must have said "show me the magic" under my breath - props to you if you get the film reference. For awhile I thought that I'd missed out on the best of the storm, wasting the experience by trying to document it. Then a massive bolt struck down at a slight angle, aiming more or less south, in the direction of Langley, from what seemed almost directly overhead. It was absolutely terrifying to see, with rumbling, echoing thunder rolling overhead to reinforce the fear; my body reacted in a quite involuntary way, trembling and shuddering and stepping back, an oath on my lips (if "holy fuck!" counts as an oath). Suddenly I didn't feel so safe out there on the balcony, with its metal railings; even if getting hit was unlikely, the sheer force of the storm was terrifying to behold - was really, really humbling. I didn't need any more dramatic examples of my insignificance. I said "Goodnight, lightning" and stepped back inside, and rearranged the curtains behind me.

Sitting in my office afterwards, going through the last set of pictures on my phone, I saw nothing that I'd missed. No lightning. I saved one photo of the parking lot and night sky just to have something to show as an illustration of the story that I was figuring on writing. I emailed it to myself - that's it above. Then I noticed that the time was 4:20. Well, maybe God's a stoner, eh? Neverminding that it was the wrong 4:20, I figured to walk back to the living room, go out to the window, open it up, and take one last photo of the night. This is that photo: 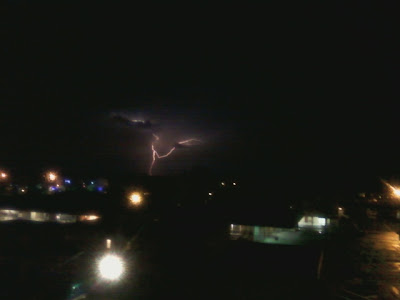 Posted by Allan MacInnis at 4:39 AM