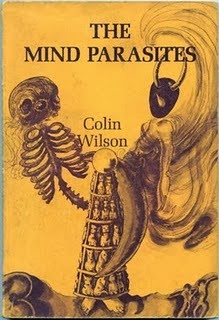 I haven't read a lot of Colin Wilson, truth be known. I have his book on Wilhelm Reich on my shelves, and I recently enjoyed the heck out of Tobe Hooper's adaptation of his novel Space Vampires, Lifeforce. I have not read The Outsider or The Occult, his two major works, and I don't know that I ever will.

However: I absolutely loved his novel The Mind Parasites. As I recall, it takes a very deliberately Lovecraftian premise - archaeologists unearthing an ancient civilization and making a frightening discovery about an ancient malign force that awakens to menace them - and updates it for the drug culture: the force is an alien entity that exists inside human consciousness, living parasitically off negative emotions, preventing people from realizing their true potential, and our intrepid adventurers must do battle with it by taking hallucinogens and descending into their psyches! Spooky as heck, but brilliant, and very thought-provoking - a great little science fiction novel.

Anyhow, sad to report that Colin Wilson died today at the age of 82. My condolences to those who knew him, or admired his work. (My apologies and respects to Nelson Mandela, Junior Murvin, Barry Jackson, and Aube - AKA Nakajima Akifumi, apparently recently deceased, though Wikipedia has not caught up with that fact yet... I simply have nothing of personal moment to contribute to the memorials, though I sure did enjoy the Clash's cover of "Police and Thieves").
Posted by Allan MacInnis at 11:56 PM