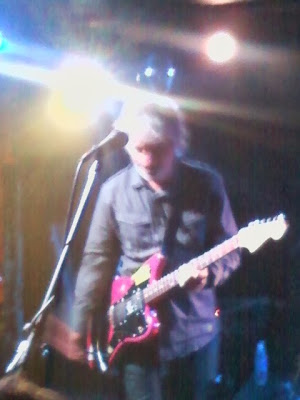 Lee Ranaldo at the Biltmore

Tis the season and I'm running around on a limited budget trying to get clear my holiday stresses, while making sure that I have enough left over to pay Bob's Shoe Repair in Maple Ridge for patching my Blundstone... just so it lasts me through the winter, y'know? January I gotta get a real job. I won't be doing a whole lot of blogging for the rest of the month - though there's stuff planned for January. (I might have a link or two to pending Big Takeover pieces to share).

The Lee Ranaldo and Pere Ubu shows at the Biltmore were just great, but I have nothing much to say on either.  Both Lee's recent solo albums are highly recommended - even people like me who are experiencing a Sonic Youth backlash (because I disliked every major LP of theirs with increasing vehemence after Murray Street) will get lots out of them (check out "Xtina As I Knew Her," which may or may not feature, along with the Dust, one Nels Cline on guitar! From his previous solo LP, which has even stronger songs - but not as pretty textures - as the new one). He didn't play a single Sonic Youth song at the show, though he did an awesome cover of Neil Young's "Revolution Blues," which is even better; and at some point, his noise effects saw him raising his guitar roofward and running it over the Biltmore's insulation and such (which I have seen no one else do there, or elsewhere). Happily, at the merch table, I got to pitch Steve Shelley with the question "has anyone interviewed you about your time in the Crucifucks?" We'll see if he gets in touch.

Ubu was nearly ruined by a weirdo heckler/ manic pogo guy with a serious self-destructive streak, but he was eventually held in check, or chucked out, or something. The band - with a seated, mellow, chatty David Thomas and Cleveland's Dave Cintron filling in on guitar duties, as the sole member of the band that has not been in the lineup for 20 years or so - did a few songs off Cloudland, to my surprise, with David Thomas joking before "Waiting For Mary" that he made a better Jon Bon Jovi than Jon Bon Jovi. They also did plenty of classics, including "Over My Head," "Street Waves," "Heaven," "Humor Me," and an awesome version of "Final Solution" near the end of the night (sorry, I don't have the complete setlist but much of the rest of the night was off the new album, plus maybe one or two songs off the last couple). I didn't get to do justice to Ford Pier, as I had tons of people to say hi to, and truth is, I really didn't even get to spend as much time as I would have liked digging Pere Ubu; it ended up being a weirdly social event for me, so that when I wasn't giving shit to people for talking during the concert, I myself was (mea culpa) talking during the concert (though I tried to keep my chatter to the peripheries - nothing is more obnoxious than people who want to stand in a prime space AND have a conversation! Please, you assholes: I've been waiting thirty years for a chance to see this band again - could you go talk somewhere else?) Ah, well: getting to dance for the third time in my life to "Final Solution" was joy enough. I'm working on a follow-up Ubu article but it won't come out til after Xmas. The main concerts on my radar now are the Red Herring show at the Railway on the 23rd (more on that later) and Sharon Jones and the Dap-Kings at the Commodore in April (my gift to my girl). That is, with one important exception....

Red Herring at the Prophouse Cafe, photo by Erika Lax, not to be reused without permission; click to view larger image

The surprise news is that I received two unexpected gig posters in my inbox this morning. True that I have failed to build a great deal of suspense about the David M. Christmas Alone in No Fun City extravaganza, but it was hard to muster excitement about telling people about shows "no one will be admitted" to, while taking it on faith that David would change his tune before the day. However, the phone number on the posters THIS time out is for the Prophouse Cafe - a very cool space, as Erika's photo above should amply demonstrate. Presumably since there is actually a venue, people will be admitted! Two shows. I'll probably go on Sunday, so those who wish to avoid me are advised to check it out on Saturday. Merry Christmas! 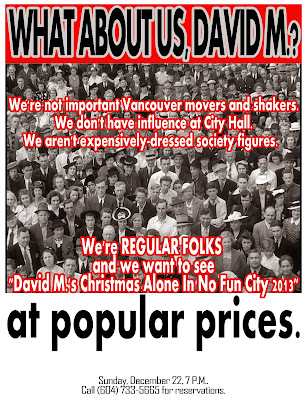 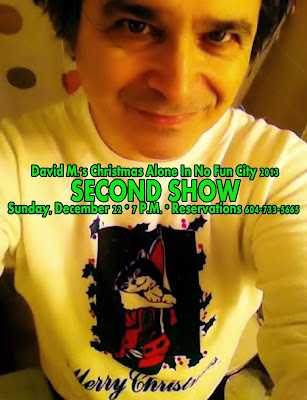 Posted by Allan MacInnis at 8:45 AM