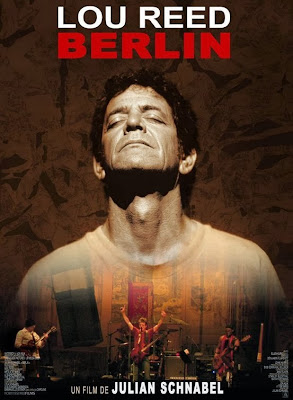 At his Christmas show at the Prophouse last Sunday, David M. performed a song about the newest addition to Santa's stable of reindeer - a song, he explained, that initially featured Kurt Cobain in the starring role, but was updated for a more timely inclusion: Lou Reed. A novel concept of where deceased rock stars go, by me, though somewhat hard to fit in my head.

I don't know why it is, exactly - certainly no disrespect here - but Lou's death this year didn't bother me so much. Maybe it was knowing that he was in a peaceful place, thanks to Laurie Anderson's touching farewell to him? Maybe it's just a variation on the principle that "if you make it past 90, you got nothing to complain about," but time-adjusted for the fact that Lou's week beat our year? Somehow I figure - reindeer or not, Lou's okay wherever he is.

There is, however, a screening of Julian Schnabel's film about Lou at the Vancity Theatre this Tuesday afternoon - a performance film based on the album Berlin, but made decades after that album came out, during Lou's first live presentations of that album in 2006. It's pretty fitting to end 2013's Music Mondays series on a screening dedicated to the most important musical figure to pass in that year. Weirdly, Sharon Jones of Sharon Jones and the Dap-Kings (playing the Commodore in April!) is in it. So's Polanski regular Emmanuelle Seigner. I might just go check that out, before the Coen-related screenings commence later in the day.
Posted by Allan MacInnis at 10:59 AM