So my girl has a sore foot - maybe a stress fracture. I know how long it can take for a foot injury to heal, especially when you have to work 9-5 and are constantly on your feet, so I gave her my old Aircast boot, to keep the pressure off it, back from when I had my own foot injury.

Problem: I seem to have misplaced the "blue squeezy thing," as I'm calling it, by which you increase the pressure on your foot by hand-pumping air into a nozzle. So here I am, in one of those fits of cleaning up that occasionally precede settling down to a project (which I used to think of as a form of procrastination, but have come to embrace as a damn good habit), and, in particular, I'm trying to sort out areas of my apartment where it is more likely that said blue squeezy thing might be (Closet A, Closet B, somewhere in the debris scattered around my desk, or perhaps buried under the mound of papers and CDRs and miscellany on the kitchen table? Well, no, I've gone through that - it ain't there). I may well have forgotten what the blue squeezy was and thrown it out ("obviously I don't need it anymore if I don't remember its function"); I'm not at all confident that I'm going to find it. All the same, en route, I'm sorting out a lot of chaos and clutter, and finding useful things that I didn't realize I had (like two pairs of slacks with no holes in the pockets, no splits up the crotch, and flies that work! I am suddenly two pairs of pants richer!). So it all counts as a productive way to not do that more important work that I'm allowing myself to avoid.

Then suddenly - isn't that the box that I bought my last pair of Blundstones in? Hmm. Could it be that when I bought my new Blundstones, I put my old ones in it? It sure feels heavy enough... oh could it be?

Here's the thing. No intent to complain, but contrary to the Australian Boot Company's advertising slogan of "Blundstones for life," I've found that these boots, much as I like them, last about three years maximum before something splits or cracks or rots. That's fine by me - "Blundstones for three years" is still a good deal, given their modest price. Plus my boots would probably last longer if I only took better care of them. My second pair - the so called "new" pair - has a large split along the seam between boot and sole on the right foot, which wore through sometime last spring. I seemed to recall, at that time, that the first pair I owned - the ones I replaced - had a split on the other foot. Which meant, perhaps, if I could find the old boots, I could match up the two good ones - one right, one left - and have boots again (for awhile, anyhow).

I couldn't find the fucking old boots anywhere, of course. I looked everywhere last spring - or so I thought. Maybe I threw them out, too? Then seeing the Blundstone box in the corner of my closet, completely ignored by me for years, it was like - aha! And indeed, the old boots are inside, and the splits are on different boots, so I have a working pair of Blundstones again! The old ones need a bit of polish, but - so what?

The reason I'm naked in the photo below, by the way, is entirely incidental: I have to take a bath. In my eagerness to capture my joy at my boot-find, I did not bother to put on clothes to snap this pic And of course, it's best to stay naked while I polish my, uh, "third" pair of Blundstones, lest I get polish on my clothes. Hence: nude with boots. 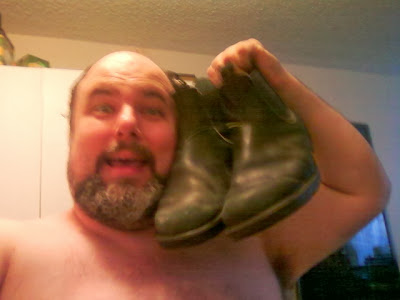 No reference to the Melvins should be inferred.
Posted by Allan MacInnis at 4:41 PM

Now you've got me thinking about that LAP.