Let's Put the 'Ist' Back Into Christmas 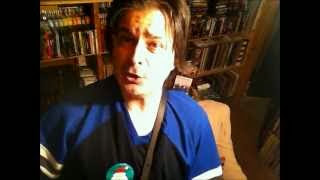 Every time I ask David M. about his upcoming solo album, to be entitled Now Is Not The Time, he assures me that it is a real thing that he is working on. Given the title, and the fact this conversation has been taking place for five or six years now, I have my moments of doubt about that. And of course, now he has announced a No Fun Alone at Christmas concert while insisting in every poster I've seen that No One Will Be Admitted. Don't ask me, I do not know.

However, he has a new Christmas song! (Actually recorded last January, but still, this is its first Christmas in public, far as I know). It joins the many videos David has loaded onto Youtube, including "Christmas Is A Sad And Lonely Time," "It's Frightful," and the not-actually-uploaded-by-him, but-still-thematically-relevant "Wookie For Christmas." And this, of course, featuring "Celebrate Like Us" as done by the David M./ Paul Leahy/ Pico lineup (whom I saw around this time, opening for Robyn Hitchcock at the Town Pump - my earliest encounter with No Fun in concert, and the night where the band performed a version of Cat Stevens' "Moonshadow" with new lyrics about being followed by an armed Muslim... a joke that I perhaps do not need to explain?
Posted by Allan MacInnis at 2:51 PM