Sorcerer is coming out on Blu-Ray! 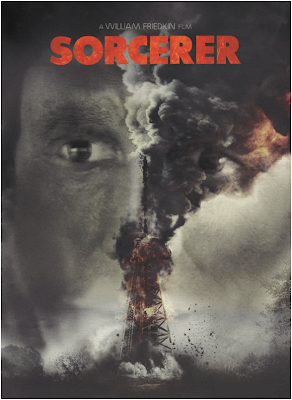 Oh, jeez. William Friedkin's Sorcerer is due out on Blu-Ray in April. (Thanks to this website for posting the new one-sheet for the film).

Anyhow, that does it. I now absolutely, positively need to get a real job so I can afford a Blu-Ray player and flatscreen TV and be able to watch Sorcerer in hi-def, in the correct aspect ratio for the First! Time! In! My! Life! Ignore the thing about torrenting, below - it ceases to apply once I embrace Blu-Ray. It would either be this film or a restoration of Saul Bass' Phase IV that would drag me into the hi-def age, and of the two, much as I love Phase IV, Sorcerer is the more powerful film... I've been waiting for this news for a loooong time.

What's weirder is that Sorcerer is not the only much-longed-for DVD release that I have to tell you about, either! The other one ain't Phase IV - but I don't know if I can go public about what it is just yet. (It'll be my first time seeing it in its correct aspect ratio, too!). Devout followers of this blog may be able to guess what film it is, but... shhh, for now, okay? Don't go spreading rumours (unlike me) - for all I know, the ink ain't dry, and we wouldn't want to jinx anything...
Posted by Allan MacInnis at 2:45 AM

Older Blu-Ray players have multiple kinds of connections. Get one of those. At a pawn shop. Brand name. Research. Cheap. Easy.