Disappointing turnout for Zev Asher night - maybe fifteen people, though different ones for each film it seemed - but the people who were there cared, including a few friends of Zev's, so I'm really glad it happened... thanks to Jim at the Cinematheque for making it possible, and Shaun and Steve and Heather and the volunteers (even the guy who suggested I make trilling sounds with my lips to relax my throat). Keith Parry still has Nimrod picture discs - even AFTER sitting on the merch table all night! Was struck that, seeing three of Zev's films in a row, that Casuistry is actually his best... of the three, anyhow. (I would love to see more of his films, but that might prove difficult to do). 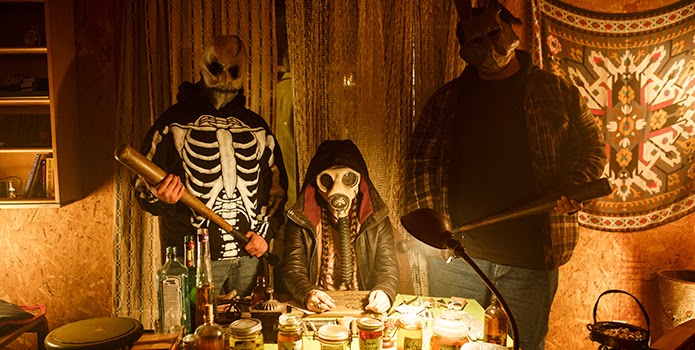 Not much to say at present. Going to check out Rhymes for Young Ghouls this weekend, also at the Cinematheque, am told by people whose opinion I value that it is one of the more interesting Canadian films of late; it won the award at the last VIFF for Best Canadian Feature, so there's that to recommend it. (I liked Tom at the Farm, too - it works as a sort of slick thriller, but with a dramatic confrontation with homophobia built in. It's not as subtle as it could have been, has a couple of touches that sort of beat you over the head a bit, but I still liked it. Vic + Flo Saw a Bear is also well worth a watch, and more of a commerically-engaging drama than the previous Cote film I looked at (Bestiare), though I had hoped for a less downbeat ending). I like the idea of Canadian arthouse filmmakers bringing their skills closer to the mainstream to grapple with serious issues on a wider scale; both of these films count as such... and deserve to be seen (I mean, they're entertaining, serious, and Canadian; that's an appealing combination).

Edited to add: for all out weirdness, meanwhile, there's this animated Canadian feature, also playing tonight. Hadn't paid much attention, to thanks to Adrian Mack for pointing it out).

Got a nice new Ani Kyd thing in the Straight that my followers might like.. Red Herring gigs again at the Prophouse January 31st, and had a recent writeup in the Province by Tom Harrison, of Bruno Gerussi's Medallion fame... Hey - check that out - Tom Harrison has a website!