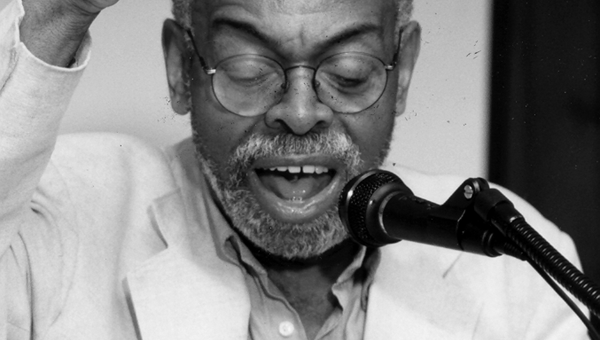 Okay, there were what seemed a few anti-Semitic barbs on a poem he read on an album of Sunny Murray's that he appeared on (alongside Albert Ayler and Don Cherry! - not sure if that's the track in question but he's on it). I didn't get into that so much; it made me, in fact, uncomfortable enough when I first heard it that I didn't keep the disc. (I harbour hopes that someday I will conduct genealogical research and discover that I in fact have Jewish blood, on the Ukrainian side of the family... I have always thought I would be a good Jew).

I also gather there are other controversies in Baraka's work... he's been accused of homophobia, misogyny... Sounds like he hadn't lost his edge in recent years, either (that poem, "Somebody Blew Up America," drew accusations of anti-Semitism, and for good reason: he taints a strong statement by allying himself with the idea that Israel had a hand in the 9/11 attacks, since 4000 Jewish workers at the World Trade Center were told not to go to the office that day. Snopes on that, if you want more: it's not just stupid - it's offensively stupid).

But Baraka's play (under his previous name, LeRoi Jones), Dutchman? His writings on jazz? His articulate, provocative, powerful lines and his resonant reading voice? His appearance in Ron Mann's film Poetry In Motion - or his grounded, Marxist materialism in the Fried Shoes, Cooked Diamonds documentary, which comes as a breath of fresh air amidst all the chanting, robe-wearing, cryptic mysticism and breathless high beat bafflegab of his peers (Allen Ginsberg, Anne Waldman, William S. Burroughs)... these things all endeared the man to me. And hey, there's just something pleasingly oxymoronic about being the Poet Laureate of New Jersey, isn't there?

Baraka's passion seems to make it inappropriate to wish him a peaceful rest: no, I hope he has a nice contentious afterlife, if such a thing exists. No doubt he'd prefer to keep stirring things up than fade into bliss and nothingness. Rest in provocation, Mr. Baraka.
Posted by Allan MacInnis at 9:59 PM