This evening, a buddy and I, socially lubricated and intent on mutual amusement, found ourselves plunging gleefully, if briefly, into the rabbithole that is the career of R. Lee Ermey. You know: this guy, from Stanley Kubrick's Full Metal Jacket: 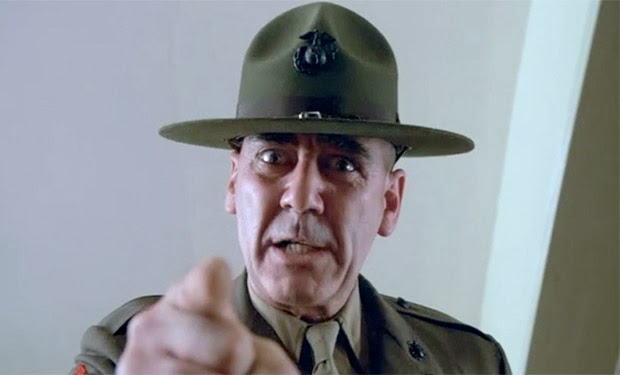 The role was not, we gather, a great stretch for Ermey; he had been a Marine Corps drill instructor in real life, and rose to the rank of Staff Sergeant. His character in the Kubrick film is also a sergeant - tho' a gunnery sergeant; Ermey has been given that rank in real life, but on an honorary basis, based on his role in the film and his subsequent activities supporting American troops. In any case, even if he was just playing an exaggerated version of himself in the film, he made an impression - enough that it seems that since that time Ermey has been doomed to a career MOSTLY devoted to satirizing his own most memorable role. Take, for instance, Peter Jackson's The Frighteners, where he basically plays the same character as a ghost. One wonders how exactly Jackson got Ermey to make exactly the same face for this shot - if he perhaps pinned a frame from Full Metal Jacket to the camera so Ermey could look at himself and replicate the look? And how many times elsewise has Ermey been requested to make this face, either in film or at parties or so forth? Full Metal Jacket is a few years shy of its 30th birthday; maybe by now, Ermey has a name for this particular facial expression/ finger-point combination, so filmmakers can request it of him?

I find such oddities of the acting world kind of curious: actors who, whatever their talents, get known for doing exactly one thing. I mean, it's great to be remembered for anything, to be able to take a single role and make a career out of it, or at least a nice supplementary income. Remember when the hitchhiker from the original 1974 Texas Chainsaw Massacre, Edwin Neal, was at Cinemuerte to introduce Tobe Hooper's Toolbox Murders? (That was the event where I first met Videomatica's BJ Summers and Cinema Sewer's Robin Bougie, by the way; Summers took part in a truly revolting sausage-eating contest, with Neal emceeing, trying to make the three participants puke with grossout suggestions involving - I don't really remember, but it was stuff like inviting them to imagine licking encrusted snot off the underside of a desk, or the bodily excretions of senior citizens, or... Mind you, the smell of the meat alone, permeating the Cinematheque, was nearly gag-inducing. The sausage did not appear to be cooked, to make matters worse, and those three guys stuffed so much of it in their mouths that I felt singularly bad for the losers, one of whom was Summers). Neal seemed an affable, ordinary, good-humoured guy, and it was impossible not to feel a sort of job envy for him: sure, it probably wasn't that lucrative a gig, but how cool to make any money at all out of doing such things? I still have a signed photo of him tucked in a box somewhere, I think (though it might have been a casualty of my move from Chez Bedbug). Neal was selling them at the merch table, and personally inscribed it, "Allan - do you like headcheese? -Edwin Neal" - this based on his most famous line in Texas Chainsaw. I'm pretty sure he wrote that on every single still he sold, unless anyone asked him to do otherwise (why would they?). It was not the same image you see on this still, which Google images turned up - but the inscription and the principle are the same: 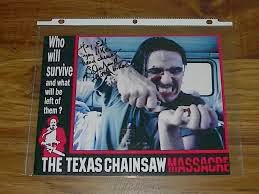 I mean, I have no idea what Edwin Neal is like, personally, or how he feels about his life, but I hope he keeps track of the number of times he has had to write or re-iterate this one phrase, and I hope he has at least ten dollars for each occurrence, nicely set aside for his retirement (the still, as I recall, cost $15). I'm also glad he has had a long career besides the one film, but even if Texas Chainsaw was the only thing he'd ever done, I would be just fine on him milking it for all it was worth, for as long as he could, as long as he was enjoying himself in so doing.

The thing is, though: much as Edwin Neal makes an impression in the 1974 Texas Chainsaw, R. Lee Ermey makes a bigger one in Full Metal Jacket. A bigger splash in the cultural pool - that's why Family Guy has included a satirical variation of the Gunnery Sergeant character, and Toy Story, and... well, you get the idea. In fact, considering that Ermey has been in some 120 films and TV shows, and IS occasionally required to stretch himself in his performances, it seems a bit sad that Ermey is really only famous for this single role, and that he should have to break out variations on it time and again. Is Ermey enough of an actor, one wonders, that he is hungry for scripts where he gets to act against type? Does he ever complain - like Max von Sydow, say - about how boring it is to get asked to do the same part over and over again?

(For those of you who did not click the link, Mr. von Sydow says therein, "I would love to do parts I have never done before, but unfortunately if you have had success in a particular type of character the casting agents think, 'Oh! We'll have something exactly like that.'" He then, apparently, sighed heavily to the interviewer and added, "It's very boring.")

The last time I re-watched  David Fincher's Se7en, where Ermey changes it up a little, playing a character who is mostly bone-weary and cynical, rather than actively authoritarian, I tried to attune myself to his performance, to be conscious that, yes, this is R. Lee Ermey in a DIFFERENT ROLE. He's not at all bad in it, though still somewhat typecast. I may have to re-visit the recent Texas Chainsaw Massacre remakes to refresh my memory as to how he fares there; there's only so much common ground possible between a violently-tempered gunnery sergeant and a psychotic ex-slaughterhouse worker. I have seen only a few of his films, but I wonder how far "out" from the gunny Ermey actually gets? What is his least typical role in his body of work? Has he ever cried onscreen? Laughed? Kissed a woman? Played a homosexual, a crossdresser, a socialist, a criminal, a victim of a crime, a used car salesman, or a liar? Has he played someone with a physical handicap, or a disease, or a foreign accent, or a drug addiction? Has he ever had to apologize for a failing onscreen? Has he ever done Shakespeare? (The R. Lee Ermey version of King Lear, for instance? I'm not sure it would work, but... by damn, some part of me is curious to see what he would do with such a part!)

In any event... what my buddy and I discovered tonight is that Ermey, in fact, has made several commercials for guns. (And knives, and other such things). He does indeed appear to be one of "them" - a card-carrying NRA type: there's a link to the NRA on his webpage, should you wish to become a member. He has even written a self-help book, Gunny's Rules, on how to "square yourself away like a Marine," in which, the blurb says, "he teaches you how to get fit, stay fit, and defend yourself. Then, he teaches you how to conduct yourself the way real men do: with assertiveness but also with wisdom and courtesy. Finally, Gunny motivates you to use your new fitness and new attitude to live life like a man of honor: to work hard, reach for high goals, and set an example with your life." Hell, maybe I should read it! To all appearances, R. Lee Ermey takes the business of being R. Lee Ermey seriously enough that one wonders if he ever felt concerned with the degree to which Kubrick was making an anti-authoritarian, anti-military film, where Ermey's character was not exactly meant to be attractive? If he has noticed any irony in the fact that he became famous for a role that was criticizing and pathologizing at least some of the values he appears to endorse?

Of course, as a Canadian small-L liberal who favours gun control and thinks the United States in general is a bit pathological about firearms, I might be expected to disapprove of such things, but whatever my values, R. Lee Ermey's gun commercials are fascinating and entertaining little mini-movies, and not only because I have never seen a gun commercial before tonight. In fact, they seem a pretty good use of Ermey's talents. They're not exactly stretching his abilities, but can you imagine a better actor for these roles? (Has Clint Eastwood ever made a gun commercial? Did Charlton Heston?).  I may not really agree with the ease of access that Americans can get firearms - but I am delighted to see that R. Lee Ermey has found such a suitable home for his talents. I'm going to go watch some of his Gunny and Glock commercials now...
Posted by Allan MacInnis at 3:16 AM