What a fucked up week...

Yikes. I skipped the Art Bergmann event on Wednesday, electing for an early trainride home... and then the West Coast Express was stopped due to trees and powerlines across the train tracks, forcing me to take the bus anyhow; leave Vancouver at 4:30, get home after 7...

...then today, one of the cheap plastic clasps on my nearly-new backpack just flat-out snapped in two while I was shopping. I just happened to be carrying a glass blender I'd bought for makin' smoothies in it; luckily the blender survived, but I had to gingerly carry the pack around all day by the li'l handle at the top and now my fingers are killin' me...

Meanwhile Marc Emery, a Canadian citizen who has committed no major crime here - and a victimless crime by any standards, involving only voluntary transactions and a relatively harmless and generally socially acceptable substance which will inevitably be entirely legalized - is being sent to the United States - a country recently governed by one of the worst war criminals in the last two centuries, note, a man responsible for countless deaths and enormous sorrow, who has gone completely unpunished - to serve fucking prison time by our gormless fucking government (protest Saturday, May 22 at Victory Square, eh?)... 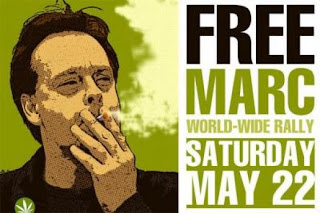 I mean, what a fucked up week!
Posted by Allan MacInnis at 6:08 PM

Glad your blender survived. I had a fucked up week too, even though I made it to the Little Mountain event.
We'll survive. We have to. If only to see what happens next . . .
RM