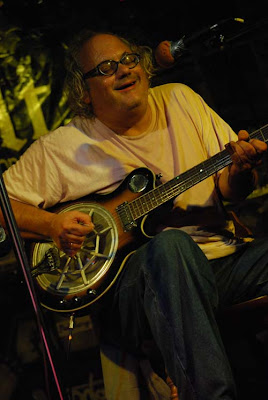 All photos by Femke Van Delft, not to be reused without permission!


I've seen Eugene Chadbourne twice at Fake Jazz, once with Han Bennink on drums and once with Doc Chad doing a stunning solo set that ranged from originals like "City Of Corruption" and "I Hate the Man Who Runs this Bar" - dedicated to the Cobalt's owners, since wendythirteen was being evicted at that point - to Captain Beefheart's "Orange Claw Hammer," which some drunken heckler thought sounded like Gordon Lightfoot's "Wreck of the Edmund Fitzgerald." (I did an advance-press interview with Doc Chad for The Skinny for that show that I also ended up blogging, here; I also have a brief plug for next week's Fake Jazz/ Music Waste show at Lick, June 2nd, in this week's Straight, talking with saxophonist Darren Williams about collaborating with the Doctor). I can think of no more appropriate an out-of-towner to play Fake Jazz - just as there's a John Cassavetes award for independent filmmaking, at some point there should be a Eugene Chadbourne award for independent musicians, since Doc Chad has been self-distributing his own music (in addition to appearing on a variety of labels) for some 35 years, putting out Volume One: Solo Acoustic Guitar in 1975 on his own Parachute imprint (which also released early LPs by John Zorn, Bob Ostertag and others). 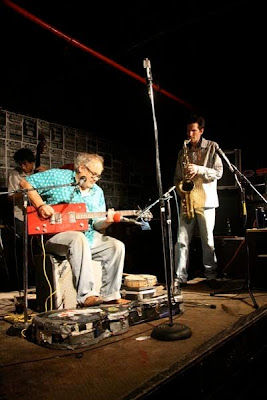 Eugene and Darren Williams at the Cobalt, 2007, by Femke Van Delft (the gig that marked the beginnings of my collaborations with Femke). Not to be reused without permission

...but just because I interviewed Darren Williams about the gig for the Straight (to cover the local angle), that doesn't mean I didn't also interact with Doc Chad... Since Eugene has been prefacing next week's show with various smalltown BC gigs, I asked him various questions about the differences playing in a bar in Nelson, say, versus underground music venues like Lick and/or the larger, more prestigious festivals and concerts where he gets invited, here and in Europe. Doc Chad responds:

....What is difficult about playing outside the big cities and college towns in North America is that there tend not to be any music venues at all, at least not for performing music such as mine and in many cases any music at all.

Last year, I was on the train between Chicago and Bloomington ILL, which makes a lot of local stops and in each one I looked at the local bars and thought about how in the old days before television was invented there were probably bars with live music in each of these towns.

So the big difference with European tours is there are venues and festivals and possibilities to perform outside of big cities and/or college towns so one really gets to go around and play in all kinds of different locations.

There is no connection at all in this discussion between the locale and the type of club, that is a completely different discussion that would come down to the club itself, no club is one way or the other just because of the type of club it is, at least not in terms of what makes the gig enjoyable for me. 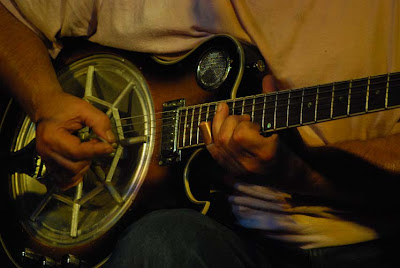 I cannot comment on Lick because I have never been there but of course you were familiar with the place I played last year, that was I guess a typical punk club but also had some particular drawbacks to it--location!--as well as some advantages in terms of ambience and the kind of people that would arrive.
I play the same program pretty much wherever I go however when one gets off into the hinterlands I watch the arriving audience quite carefully to see if I can figure out any way to pull the whole thing off. Performing for example at the little North seaside town of Husen in Germany, I noticed some older couples coming in expecting to hear their idea of country music so then I start out on banjo rather than electric guitar, which in the end did not make any difference because they thought my banjo playing was so freaky.
Playing in Butte, Montana, which is something that would probably never happen again, it seemed like the few people there were all male prospectors, they looked like they had been dragged in out of the dust and rocks. I had no idea what to play and in the end had no success whatsover getting them to stop paying attention to their "red beer" (beer mixed with tomato sauce.) 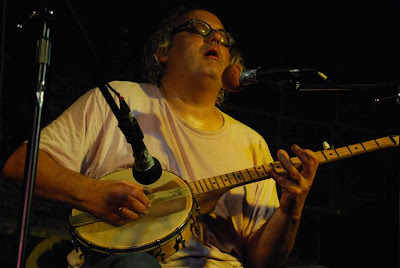 Recently a well known jazz saxophonist (talent deserving wider recognition in last year's Downbeat poll) wrote me a letter complaining that his agent was booking him in too many far away, small places in Europe rather than the major towns. I explained to him that the same people move around from place to place and in the end the audience can only be reached one person at a time, everyone has different ears and the guy in the front row in a village could actually be from a big town, or vice versa. But the thrill of travel and getting to isolated places and reaching an audience there in what can be a beautiful and charming setting is one of my favorite things about touring.
Eugene Chadbourne plays Fake Jazz/ Music Waste next Wednesday, starting at 10pm; there will be a solo banjo set and then a trio with Williams and Kenton Loewen. See you there! 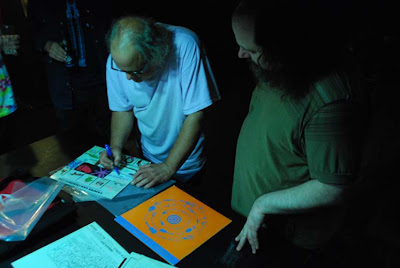 Eugene signs some of my EC vinyl! Thanks to Eugene Chadbourne for participating in this. Photo by Femke Van Delft, goddamnit!
Posted by Allan MacInnis at 6:17 AM

I've been trying to figure out where Lick actually is, any idea?
N.

Yeah, it's at 455 Abbott at Pender, sort of attached to Honey, in the area where the Blue Lotus used to be... as I recall; I've only been there a couple of times, but unless I've gotten completely confused, it's across from Cinemark Tinseltown, near the corner...